A Critical Time in Country Music 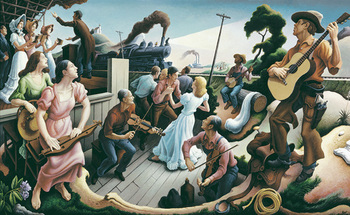 In the natural history of the Earth, there’s a period known to biologists as The Cambrian Explosion. It was an era when the rate of evolution accelerated so rapidly that even Charles Darwin, the father of the evolutionary theory, admits it stands as one of the main objections to his findings on natural selection. In a relatively short period of time compared to the rest of evolution, the animal world was completely re-organized, leading eventually to the modern animal structure we live in today.

Over the last few months, and the last few weeks specifically, we have been going through a country music Cambrian Explosion of sorts, with massive, earth-moving events completely re-shaping the style and infrastructure of a genre that has been around for over 70 years. Arguably there’s been more significant events in a short period than any other time in country’s history.

Even the way downtown Nashville looks is changing, with the massive Music City Center being erected, the Songwriters and Musician’s Hall of Fame being swapped as part of the project, a water park that was supposed to be built in partnership with Dolly Parton falling apart because of  Gaylord’s sale, and Ryman Hospitality putting the naming rights to The Grand Ole Opry and the Country Music Mother Church, The Ryman Auditorium, up for bid. Downtown Nashville, the holy land of country music, is being revamped from the inside out just like the music business that it’s home to.

And this doesn’t even begin to take into consideration the sonic changes to country music, from the hyper-driven pop songs from Taylor Swift dominating the charts, to the intrusion and mainstream acceptance of country rap, and the increased exposure of all of country music’s drama in the new popular television show Nashville.

Aside from Taylor Swift’s first CMA win for Entertainer of the Year in 2009, virtually all the major events a country music historian may use to erect a timeline of how country became what we will know it to be in the future have happened in very recent memory. It’s human habit to think you’re always living in the most important, critical time in whatever it is you’re following, but in this case, the concern seems to have merit.

But one of the things I find most curious about the recent string of current events is how it has been received in certain sectors of the country music population. The country music underground was virtually birthed out of the rapid move to pop in country that was ushered in around the late 90’s, early 2000’s. Without the fervor and dissension around the direction of Music Row and mainstream country music, there may have never been as strong of support for acts like BR549, Hank Williams III, and Dale Watson. For a decade the underground was the sector of country music organizing against the intrusion of pop in country and trying to preserve country’s roots.

But where are those voices now? As these historic issues have been presenting themselves one after another in recent months, Saving Country Music has not only had to work overtime to at least attempt to cover them from an independent viewpoint (let alone attempt to organize against them), but to fight off a strange form of active apathy that militantly wants to not give a shit.

Meanwhile where is there support for attempting to preserve the roots of the music coming from? Carrie Underwood fans of all places. Carrie Underwood fans! They have been making front page headlines for being against Billboard’s new chart rules, even when as Billboard’s Editorial Director Bill Werde points out, Carrie Underwood could very easily be one of the beneficiary’s of the new system. Carrie’s fans’ reaction wasn’t based soley on their self interests, but for better interests for the entire country genre.

The Billboard issue has had massive reverberations throughout the music industry, with fans of R&B, rap, and rock up in arms that artists with “Crossover” pop appeal are virtually entrenched in the top positions on Billboard’s charts. Spin called the new rules “clueless.” The biggest paper in the world, The New York Times interviewed me to get my point of view, even though many of my readers found the issue boresome.

One thing that did not happen that was anticipated with Billboard’s new rules is a complete Taylor Swift dominance of the country song chart, like Mumford & Sons did when they released their new album. Why? Partly because Swift and her label Big Machine purposely limited the sale of her new album Red to certain outlets. For example, the album couldn’t be bought on Amazon until a week after its release, and Scott Borchetta refuses to make the album available on Spotify, Rhapsody, and other streaming services that are now counted in Billboard’s song charts.

So what does all this mean? It means that the elements of country music that used to keep it in check with its roots increasingly don’t care any more. Like refugees, they’re retreating to their little independent scenes and micro-scenes, and forming an elitist “we have ours, screw the masses” bent. But that’s the same flawed logic of saying, “I have a job, who cares if my neighbor does?” Eventually, the creatively-bankrupt nature of mainstream music is destined to creep into your world.

Meanwhile Music Row and the big money forces in Nashville can do whatever they want without fear of retribution or reprisal from the roots of the genre. Carrie Underwood fans? They can be managed; cast them off as crazy. That Saving Country Music guy? He’s a self-absorbed wacko whose losing relevancy.

At the CMA Awards, we could have a country rap song win Song of the Year, and a girl with a song that they purposely made to be pop, and purposely did not release a country version win Entertainer of the Year, and the howls will be half as much as when Eddie Rabbit released “I Love A Rainy Night” in 1981.

So what’s the solution? Honestly I don’t know. I wish I had a red bow to tie this article up nicely with, but I don’t. All I know is that the commercial forces aiming to restructure country music into America’s predominant pop genre have never been better poised to do so. Little is stopping them.