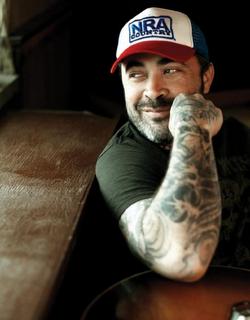 Just last week, Saving Country Music showcased some quotes from Staind frontman and country artist Aaron Lewis who had some disparaging things to say about some of the current trends in pop country to the Marion Star newspaper in Ohio.

“I think there’s enough beer on the beach, partying on the tailgate, driving around in a pickup truck, moonshine songs,” Lewis said in part. “I think that everything has been pretty well beaten to death … There’s a song out right now that’s a big single for a big act, and at the very end of the song you can hear a banjo come up in the mix for four measures. And you’re like, ‘Oh, there’s the country aspect of it. Now I get it.’ But that is not country music, I’m sorry.”

On Friday, Jan. 24th, Aaron Lewis was playing a show at the Thirsty Cowboy in Medina, Ohio, and during his set he decided to take the recent #1 song “Redneck Crazy” by Tyler Farr to task. The controversial tune portrays a jilted male stalking his ex-girlfriend, including driving up onto her lawn and throwing beer cans at her, and was accompanyied by a ridiculous video featuring Duck Dynasty stars and Colt Ford. The song solicited a scathing rant from Saving Country Music in October.

“I fucking hate this song,” Aaron Lewis told the Thirsty Cowboy crowd. “I just always thought the message of this song was pretty fucked up. But obviously, a lot of people related to it ’cause it went to #1, go figure.”

Lewis continues, “So last weekend I was at my buddy’s house watching the Patriots game, and my buddy Zach started playing this song and I was like, ‘Ah fuck, don’t play that fucking song.’ And then I started listening to the lyrics and he’d re-written the entire song in kind of an answer to the original song.”

The alternative version called “Redneck Crazy Revisited” was written by a songwriter named Zach Woods. “There’s a lack of character reflected in a lot of what you hear in popular country today,” says Zach. “And no matter which way you spin it, ‘…the kind of man that shows up at your house at 3 AM’ is not the kind of man anyone would want their daughters or sons hanging around with.”