Unlike some aging country music talents, like I don’t know…maybe the one with a “Jr.” suffix in his name combing in Just For Men every other day and calling up Kid Rock’s manager to check for availability for the next video shoot to try and stay relevant, Alan Jackson’s career has been marked by stability and class. Was Alan any more country than Garth Brooks when he first came up in the early 90’s? No, not really. (Well then again, there was that stint where Garth put on eyeliner and changed his first name to Chris.) But as Nashville’s Music Row has steadily moved towards pop and the awful counter balance of “new Outlaw” laundry list songs, Alan has remained on the accessible, radio-friendly side of traditional, honky-tonk country without chasing the trends.

I’d hate to be the record label representative walking into the studio saying, “Hey Alan, we’ve got this brand new song about ice cold beer and pickup trucks we’d like for you to consider. Or how about this country rap opportunity with Colt Ford?” Because let’s face it, Alan Jackson’s mustache could kick all of our asses with one hand ,while restraining Chuck Norris’s mustache in a panty hold with the other. You may not count yourself an Alan Jackson fan, but it’s hard to call Alan Jackson anything else but country. If country music is the audio equivalent of wrestling, Alan Jackson is the good guy you can’t help rooting for. 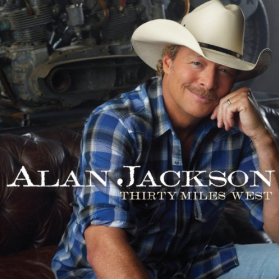 And if 90% of the stuff they play on country radio these days is crap, then Alan represents the 10%. He’s the one respite when the Mrs. or kiddos flip over to 98.1 you don’t want to reach for a 9mm and point it at either your audio interface or your own pie hole. And unlike George Strait, Alan has the skins on the wall of writing a lot of his own material. He also has accomplished many memorable achievements for real country fans, like his song “Midnight in Montgomery,” standing up for George Jones and the song “Choices” at the CMA’s in 1999, and the duet with the aforementioned Strait on the song “Murder on Music Row.”

Yet Jackson lacks the umpf that the true hard country, deep traditionalists, or neo-traditionalists are looking for, and is still too corn pone or mainstream country for the NPR or Americana roots crowds to cross over to. I thought the timing was really good for Alan to come out with this album and really make some sort of statement, to be bold, kind of like what Marty Stuart is doing these days. But we can’t be surprised what we got was the same steady hand, the same solid songs and performances that have marked his 20+ year career that benefit from the balance between being traditional and accessible.

I don’t hear any of the mega-hits or even moderate hits that marked Alan’s early career here, but I’m not sure that is what Alan is after any more. The first three songs ” Gonna Come Back as a Country Song,” “You Go Your Way,” and the self-penned “Everything but the Wings” employ country wit in the classic way that makes us smile. The anthemic 7 1/2-minute “Dixie Highway” co-starring Zac Brown is the fun portion of the album that by the end you want to keep going.

The song that really struck me was “Her Life’s A Song.” It’s an A&R person’s dream in this age where middle-aged women driving the litter back and forth make up country’s most lucrative listener. You would think it was concocted by a team of pro songwriters in a Music Row cubicle farm, but Jackson came up with this one all by himself. As commercial as it comes across on the surface, Jackson shows his wit and wisdom through a different avenue–understanding appeal–and does the job any songwriter yearns for by creating a character we all can believe, see, and relate to.

No land speed records are broken with 30 Miles West, nor are any attempted. It is safe, steady, and solid. It will keep all the hardcore Jackson fans fat and sassy, and hopefully flirt with some radio play to offer intelligent music ears that one refreshing moment in a 40-minute radio segment where they can smile and know not all hope is lost.