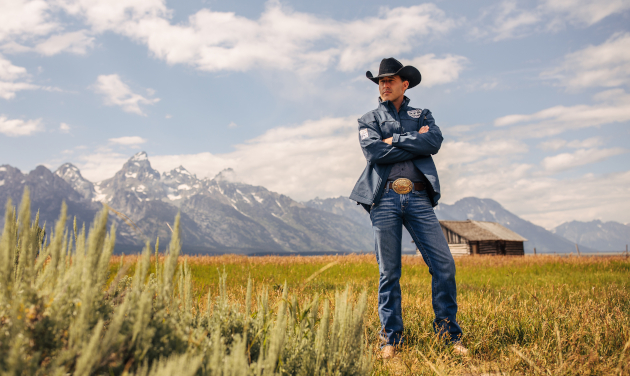 Getting a handle on Aaron Watson is harder than chasing down a half spent bar of Dial racing around the shower floor like a hairless rat. On the one hand, he is nothing short of an independent country maverick, inspiration, and superstar in the way he’s topped album charts and even launched radio hits while keeping it 100% in house and off Music Row. Not even Sturgill Simpson, Tyler Childers, and Cody Jinks can boast a record like that.

But generally speaking, if you roll up on an Aaron Watson record expecting a traditional country clinic or some innovative acid trip take on twang, you’re going to be disappointed. Aaron Watson isn’t some misanthropic “artist” looking to be misunderstood by the world for some sense of personal integrity, or a dyed-in-the-wool Outlaw out there half timing his way to honky-tonk immortality. Aaron Watson is a church-going family man who takes a pragmatic approach to his music as the family business, wanting to bridge appeal across all sectors of country music, and put a wide audience together where everyone can find something to enjoy.

Aaron Watson will pen and perform some of the most heartfelt and meaningful songs you can find in Texas country and beyond. And if you don’t believe that, you’ve never heard “July In Cheyenne” or “Bluebonnets.” But then he’ll release a song that feels like a reach for commercial radio acceptance that can make you squeamish. If you’re a staunch Aaron Watson fan, you find the fun and value everything he does because beyond the music, he’s just so likable and true to himself. But if you’re leery of country singers going turncoat, you’ve always been unwilling to buy into Watson 100%, even if he never signed to a major label like Cody Johnson, Sturgill, and now even Tyler Childers have.

Red Bandana comes boasting a full twenty tracks of music that are all penned by Aaron Watson alone. That’s quite a sizable and impressive feat in itself. Watson released a 16-track album just two years ago, so it’s not like he’s been saving up material for a long time. Honestly, you might rather hear there’s only 10 or 12 tracks, and Watson had recruited some of the best of his fellow Texas songwriters to help polish up some of the songs. The music is always developed and recorded well when it comes to Watson and his band, but some of his song ideas can feel tired, refried, formulaic, or downright silly.

Trepidation also preceded Red Bandana for some from the lead single, “Kiss That Girl Goodbye.” The word “bad” is not the right way to describe it. It was just … busy, and kind of weird. You kind of liked it, but didn’t know if you should, or why. It was like three songs mashed into one. It was classic Aaron Watson, meaning a little bit traditional, a little bit contemporary, and a lot hard to pin down.

And of course in the run up to Red Bandana, Aaron Watson is running around telling everyone with a pen or a microphone that it’s his greatest album he’s ever put out, it’s a super personal work, yadda yadda yadda, like every artist says before they release a record. With Aaron Watson, you just have to see what you get, which is likely going to be some good, some bad, and some in between. 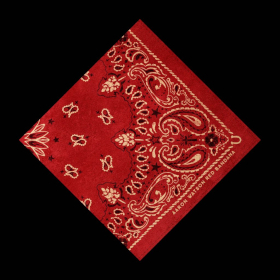 But Red Bandana is anything but typical, for Aaron Watson or anyone else. When Watson says this is his most involved and personal work that he rates at the top of the heap, believe him. When others say they’re shocked or ecstatic about how good this record is, take their word for it. With Red Bandana, Aaron Watson defies his own odds, and the odds of many others in his weight class, and 10 studio records deep into his career, puts out arguably his best album yet.

From the very first track, which is a poetic recitation in tribute to Guy Clark, you get the sense of the inspired and ambitious nature of this work. “Ghost of Guy Clark” is not just a piece of audio, but an admonition from Aaron Watson to himself of how to approach Red Bandana, how to concern yourself with honesty and integrity first, follow your heart, and let the rest of the world interpret it as they may. This guiding principle of taking the lessons of country greats and building off their legacy is what results in Red Bandana feeling nothing short of triumphant.

Aaron Watson can sing songs about perseverance and overcoming obstacles, and believing in yourself without feeling sappy or overly-inspirational because he’s done it himself as an independent country artist. Possibly only fellow rodeo circuit entertainer Chris LeDoux can boast such success without mainstream assistance. This renders a song like “Dark Horse” as blood pumping and compelling as opposed to trite like some overwrought motivational speech.

Red Bandana is not a concept record, but the beginning and center sort of work that way, with the instrumental “El Comienzo del Viaje” helping to set the mood for the album early on, and putting your ears on alert that this won’t be just another country music record from Aaron Watson or anyone else. “Riding With Red,” “Red Bandana,” and “Trying Like The Devil” create a really great trilogy that keep you enthralled throughout the lengthy undertaking that is listening to Red Bandana.

But the best songs might come before this with the really moving, traditional country moments of “Country Radio,” which once again underpins the reverence for country music’s past displayed in Red Bandana. “Am I Amarillo” works like a new generation’s version of George Strait’s “Amarillo By Morning.” The final song “58” is the perfect tribute to the Route 91 Harvest massacre victims—simple, honest, and short enough to not render it sappy or exploitative. Aaron Watson’s big heart comes through in so many moments on Red Bandana, including the open-minded “Blood Brothers,” and the honest “Trying Like The Devil.”

You’re simply overwhelmed while listening to Red Bandana in just how involved and lush everything is, from the songwriting, to the arrangements that include strings and other additional instrumentation. You feel like it would have taken most other artists four or five years to complete a record like this, and they would still likely fall short of what Watson has accomplished, while Watson wrote the whole thing himself and recorded it in just over two years in the midst of touring full time. Red Bandana is a marathon and an undertaking, but is only rendered impressive in its scope and breath because Watson was able to pull off his vision with inspiring results. Co-producer Jordan Lehning also deserves credit.

All of this praise doesn’t mean that there still aren’t some imperfections for Aaron Watson skeptics to point to. You won’t hear any drum machines or synthesizers on this record, but Aaron tries to widen the audience for certain songs by composing rhythmic sensibilities into certain moments, whether it’s in clapped rhythms, or in the sometimes monotone cadence he may carry in certain songs that some may even mistake for rapping instead of the cowboy recitations they’re meant to evoke. If talking or smoothing out the melody of a song is what Watson believes is best for it’s delivery, that’s what he’ll do, and he does it even more than normal in Red Bandana. But understand, this isn’t just a country record, it’s a Western record. It’s a cowboy record. And Aaron Watson works to contribute his own works to the cowboy poetry canon in some of these 20 tracks.

There’s also a couple of those cringeworthy Aaron Watson songs that you have to anticipate making their way onto a 20-song record. We’re speaking of a song like “Burn Em Down,” which is a Marlboro-fueled song about rebound sex that could have been used to slim this track list down to 19. The snappy and saccharine “Shake a Heartache” is slightly better, but could have been left for the Aaron Watson B-side compilation down the road. Red Bandana will still not render Aaron Watson country enough for some hardliners and rednecks, while it won’t be cool enough to get the contemporary crowd to replace it for their Thomas Rhett. But those quick to dismiss this work for whatever reason are missing out. Watson could have perhaps slimmed this record down and turned it into a true masterpiece. But it doesn’t mean one still isn’t present here, with the weaker moments easy to cast off as opposed to anchoring down everything else like on some records.

Artists hitting double digits in their album output aren’t supposed to be hitting their stride, but there’s not a lot about Aaron Watson that is predictable, or easy to explain. He’s one of a kind in country music, and always has been. If you cast him off as Texas music’s version of pop country, you’re missing a big opportunity here. Red Bandana is ambitious in its goals, inspiring in it’s scope, and nearly flawless in its execution. It isn’t just a personal best of Aaron Watson. It’s one of the personal best for country music in 2019.