Album Review – “After The Fire” by Cody Jinks

2018 was supposed to be the “Year of Cody Jinks” in country music. And in many respects, it was. The Ft. Worth-native signed to Rounder Records. He held his inaugural “Loud & Heavy Fest” in his hometown, which blew away everyone’s expectations with the organization and attendance. He released the album Lifers, which resulted in the best debut of his career by going #2 on the country charts, and was only held out of the top spot by superstar Kenny Chesney.

But reception for Lifers was a little mixed if we’re being honest, and surprisingly so. Many long-time Cody Jinks fans loved it, but others felt it was a little weak, even though the lack of enthusiasm seemed to be more due to how high expectations were after coming off of two career-defining efforts in Adobe Session from 2015, and I’m Not The Devil in 2016. These were albums for the ages that helped define the insurgent era of country music. In hindsight, it may have been impossible for Cody Jinks or anyone else to top those particular efforts, and it would be foolish to try.

And it also might have been foolish to lump grandiose expectations on an artist by designating a specific year on the country music calendar to them, especially Cody Jinks. He’s just not that kind of performer. It’s the humility, authenticity, and down-to-earth nature of Cody Jinks that has endeared him so fervently to his dedicated fans, many who affectionately call themselves “Flockers.” Jinks is not superstar material in the traditional sense, meaning someone with a boisterous ego, or some misanthrope prone to shake up the mainstream via wild antics and sensationalization. He’s one of us, which is what makes it so easy to connect to his songs, both recorded and performed on stage.

2019 is the year Cody Jinks settled down into the artist he really is. After The Fire—and its sister album The Wanting to be released a week later—don’t have any label support behind them at all. Though Cody Jinks has promised a second Loud & Heavy Fest installment is forthcoming, he postponed it for this year to focus on other priorities. Instead of some headlong push to take over the country music world in 2019, Jinks put his efforts behind launching a new website feature where all the songwriters, players, and stories behind the songs can be found in one place—something you would think would accompany most every album release, but is rarely if ever done. This puts the emphasis more on Cody’s co-writers and band members as opposed to himself.

Releasing two albums on successive weeks is still an ambitious order though, and the worry with these types of releases is you’ll get one good albums worth of songs distributed across two titles. With this unique double album release, it really will take both records seeing the light of day and some time to digest and deliberate over them both together before we can come to any hard and fast determinations on either. But Cody called upon songwriters like Larry Hooper, Ward Davis, Josh Morningstar, David C. Banning, and Tennessee Jet to backstop his efforts, and on this first record at least, it’s very hard to conclude that the material is diluted or lacking.

Where Cody’s last album Lifers seemed to focus more on his dedicated fans and the hardscrabble, blue collar lives they lead, After The Fire is much more introspective and inward-looking. It’s about Cody’s struggle to balance music and life, trying to be a good husband and family man first before becoming the big star some would love to see him blossom into. Where Lifers saw Cody sometimes entering into the realm of platitudes, the personal nature of After The Fire makes it feel much more resonant, and much more lasting. 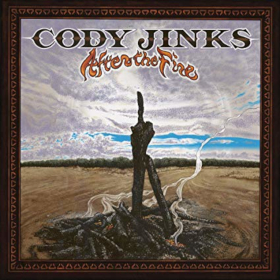 The title track of the record is about finding purpose and being grounded in meaning something to somebody else. “Yesterday Again” is about making amends and starting over as opposed to walking away from something that has such important personal history. “Tell Em What It’s Like” is about the misconceptions many have about how easy and fortunate it is to be the spouse of a musician, when musicians are often managing manic personalities, and are always leaving or gone. And even though the words are from Tennessee Jet, the song “Someone To You” seems to best encapsulate what Cody Jinks is trying to get across in After The Fire.

I used to dream of fame and fortune, I used to wanna be a star
It was the greatest aspiration, in my naïve stubborn heart
But with the years I have grown wiser, learned without love there’s no use
Now I’d rather be a no one, if I ain’t someone to you

These aren’t just words. They’re never just words when it comes to Cody Jinks. They’re his intentions put to rhyme. Where some artists obsess over their careers and sacrifice their personal life to achieve notoriety, Cody Jinks is more selective, and private. He’s not going to risk his home life for expectations assigned by himself or anyone else. No doubt he feels blessed and fortunate, and like all of us, wants to grow and move forward. But not at the risk of losing who he is, which we all see happen so often to musicians as their stock and name recognition rises. There’s a rumor that the reason Cody Jinks shaved off his iconic beard earlier this year was to torpedo any obligations to make high profile appearances while promoting his last record. True or myth, that speaks to how committed Cody Jinks is to staying within himself, even as the spotlight continues to shine brighter upon him, and the commitments continue to hold more weight.

This theme of devotion to himself and his family runs through virtually all the tracks of After The Fire, including what may be the the best song on the record, the acoustic “William And Wanda” co-written with Rebecca Jinks. What starts off seeming to be a sweet little song about a fussy old couple, reveals itself to be something deeper and more touching. Even on the song “One Good Decision,” which finds Cody in rare, boot scootin’ and up-tempo form, it’s the story of commitment that makes the song work so well. Same goes for “Think Like You Think,” which on the surface may come across as just another “think/drink” drinking song, but in the context of the record, once again speaks to the struggle of staying grounded and balanced as a musicians and family man.

Cody Jinks surrenders the floor to his backing band the Tonedeaf Hippies for the final song “Tonedeaf Boogie,” underscoring how this is an album where it seems like Cody is working to realign the focus away himself, and onto the songwriters, the players, and the people in his life that mean the most. He’s enjoyed plenty of spotlight. Now it’s time to share it with others.

The music of After The Fire is typical Cody Jinks, except for “One Good Decision” mentioned earlier which adds a little variety to the record, as does the acoustic “Williams and Wanda.” But there does seem to be a certain indefinable something slightly lacking in the music, perhaps a level of energy. And where some complained about the mixing and mastering of Cody’s last record Lifers (which this set of ears didn’t pick up on), there are a couple of moments on After The Fire where you do find yourself questioning some of the production decisions. The fiddle on “Ain’t A Train” comes in pretty hot, and a few other things will likely grate on some of the Audiophiles in the audience.

Releasing two separate albums on consecutive weeks, and with the dedicated fan base Cody Jinks boasts, he could pull off going #1 with two records back to back—a rare feat for any artist, let alone one without any record label at all. But chart positions and sales records are not what fans listen for. It’s fun to root for your favorite performer, and when it comes to independent music, their success feels like your success, because you put so much stock and effort into their career as well.

But ultimately it’s the music that you remember, that you go back to over and over, and numbers and achievements feel meaningless compared to how a record like After The Fire can make you feel overall. The other way artists are judged is as husbands and wives, mothers and fathers, as bandleaders, and friends. All the money and fame can still leave you bankrupt if your priorities are not properly aligned, and After The Fire doesn’t just capture Cody Jinks making sure those priorities are in proper order, it reminds and inspires the audience to do the same.

Purchase After the Fire from Cody Jinks

Purchase After The Fire from Amazon