How hard could songwriting really be? Hell, you learned a few chords on the guitar in college, and if you had some more free time you could probably gnaw on rhyming a few lines of verse … or so you tell yourself. Then you hear an album like Beautiful Lie from the First Couple of Texas Country, and it’s so enriching and involved, you’re immediately demoralized at your prospects. It’s a good thing you pursued being the number one Allstate agent in your hometown instead, because songs of this quality can’t come from just anyone. And of course you still get to enjoy the work of your favorite songwriters and performers as a spectator.

Don’t try this at home. The fourth album pairing together the Texas music power couple of Bruce Robison and Kelly Willis is a veritable workshop on how to write songs, and select others out of the tome of recorded works like choosing the perfect wine to pair with an entree. And needless to say Kelly and Bruce comprise their own consummate blend of textures and aftertastes, so much so that it’s easy to conclude they would make the ideal collaborative duo even if they weren’t playing house together.

Bruce Robinson can’t help but be country, but not in the starched shirt, George Strait sort of way. It’s more folksy and earthen. Kelly Willis has that little touch of soul in her writing and singing, and brings this matriarchal care to all her efforts. Blend it altogether and you get most all of your musical taste buds satiated with Beautiful Lie—some honky tonk, some really great songwriting stuff, and a few surprises in between. And of course everything is rendered more endearing via two part Texas music harmony. 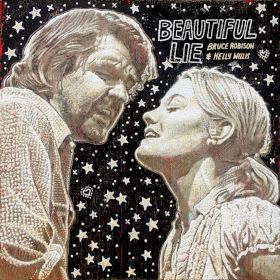 The new album includes a couple of classic ringers, including “One Dime At A Time” done most famously by Del Reeves, “Lost My Best” by Uncle Walt’s Band, and “Beautiful Lie” from The Amazing Rhythm Aces (who just lost frontman Russell Smith). These wet your whistle, but it’s the remarkably-written “If I Had A Rose” starting off the set that speaks to the type of delicate care quality songwriters bring to their craft. “Can’t Tell Nobody Nothin'” is a bit more plain-spoken, but still cunning with its country wisdom, and just as remarkable with its wordplay and perspective.

The upbeat country rocker “Brand New Me” hides a sad story, and might be the best in the lot. Along with Bruce writing a bunch of the songs for the record, Adam Wright—known for working with Alan Jackson and Lee Ann Womack—also contributes three tracks to Beautiful Lie. The album also has a bit of a Houston theme to it, with “Astrodome” co-written by Robison and Jack Ingram comprising one of the early favorites, and the final track “Heartache in Houston” stripping it all back to just Bruce, Kelly, and a little bit to steel guitar and piano, exemplifying and illustrating the stellar chemistry behind this singing couple.

With some of the record’s best songs being previously-heard material, it’s probably not worth getting too hyperbolic about this release, while it’s lack of a cohesive expression sonically or thematically may make it neither fish nor foul to some. But Beautiful Lie is definitely a sweet and sincere effort that will add positively to the work of Bruce Robinson, Kelly Willis, and their growing catalog of music together composing the storybook to their shared lives.

Purchase Beautiful Lie from The Next Waltz