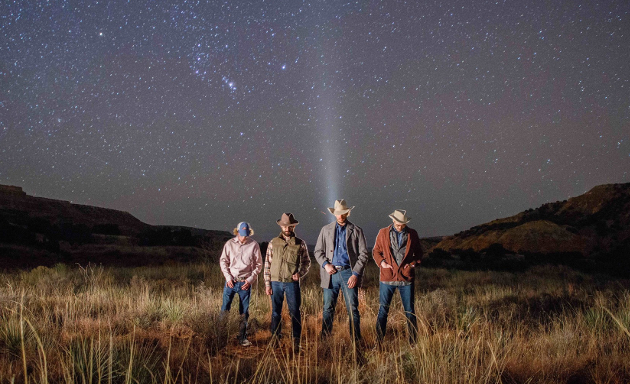 Not exactly a country music space opera, nor a full-blown concept record, Country Music Deathstar by Texas Panhandle country band Comanche Moon nonetheless makes a compelling argument for itself with an advanced and forward-thinking approach to country rock, while keeping the music and songwriting grounded in everything that’s great about authentic country music.

West Texas ain’t the cosmos, but it’s vastness and history have inspired many songs and artists over the years no different than gazes skyward at the celestial heavens. That’s why the region has consistently churned out some of the best songwriters and performers from the Lone Star State and beyond, and it’s also what makes Texas country a much more enriching alternative to whatever Music Row has cooking.

Chandler Sidwell and Mark Erickson make up the principals of Comanche Moon, and both come from multi-generation Panhandle rancher stock, underpinning their music with rugged country roots, and genuine stories of agrarian struggles. It’s their interest in classic rock that makes this a more unique project, which is not completely foreign to what has inferred a lot of the Texas music sound over the years. But instead of spending time soliloquizing how the beer and babes are always better in the Lone Star State like some of their Texas compadres, Comanche Moon is more preoccupied with composing meaningful songs and stringing them together in a more deliberate manner, both in story and sound. 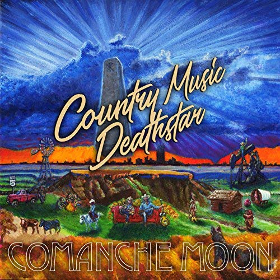 Country Music Deathstar takes you on a journey. Little audio vignettes help bind the songs together, while the stories of love, loss, struggle, and restoration flow one into another, and tell a bigger tale. At times the stories necessitate slimmed-down traditional country interpretations, with fiddle and steel guitar painting the picture. Other times the guitars come at you loud and heavy, with the bark and dissonance needed to find the appropriate mood for the moment. Still other times the music is a mix of both country and rock, but with neither impinging on the other. It’s a wide sound coming from Comanche Moon, stoking the imagination.

This record leaves all the in-between stuff out, and instead focuses on the meaningful moments that go on to define us, like the current single of the bunch “Oilfield Blues.” Worrying over the tough decisions of buying a herd, selling your mineral rights, trying to scratch something out in the city, and subdividing the family land are the big choices the sons and daughters of farmers and ranchers have to wrestle with on a regular basis as the prairie succumbs to the churn of modernization. Mixed in there are the affairs of the heart, which makes the tough decisions that much more daunting. Being born on a ranch, you don’t just have your own dreams to tend to. You have the constant pull to keep the dreams of your family and ancestors alive via the land they built them upon.

Produced by guitar player Tim Allen of Shane Smith and the Saints, and recorded at Yellow Dog Studios in Wimberley, Texas with Dave Percefull and Adam Odor, Country Music Deathstar is an album that pulls you in and imparts wisdom along with the entertainment. The band feels like a part-time endeavor for the members of Comanche Moon at the moment, but Country Music Deathstar is a full-time effort, surpassing in imagination and scope what many touring bands compile who perhaps are too preoccupied by the commercial application of their efforts to do something this expressive.

That said, sometimes when you don’t choose a lane, you can get left behind or forgotten. Too country for rock, and too rock for country—or “Texicana” as Comanche Moon calls it—can create a wide appeal, or it can leave you struggling to find favor with either camp. Luckily for Comanche Moon though, they have songs, which is the trump suit in the increasingly garbled jungle of musical genre.

“Comanche moon” is a common term in Indian country, taken from the propensity of Comanche war tribes to conduct their notorious raids with the aid of a full moon cycle. The Texas prairie turns downright lunar in the blue and grey glow of full moonlight, making men into apparitions, and mere topographical features into magical constructs. It sends the imagination churning, similar to listening to Country Music Deathstar.