In an attempt to clear the backlog of 2011 albums worthy of review I come to Eilen Jewell and her fourth long player Queen of the Minor Key. Before we get too far, I’ll reveal that my take on this album is somewhat contrary from the others you will find. Many folks will preach to you how this is one of the standouts in the roots world for 2011, and though I like this album and it has some great elements, I find myself in a position I never enjoy: attempting to balance the hype.

For those not familiar with Queen Jewell, first and foremost she’s a singer/songwriter. In the same mold as Big Sandy and Wayne “The Train” Hancock, she bridges many elements of American music: country, swing, jazz, rockabilly, by not taking those older art forms and melding them together, but traveling back to a time when all these specifics genres were still forming, and the differences between them were still relatively obscure. 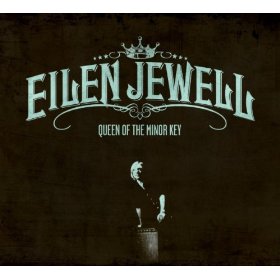 This album has a super hit on it in the form of the “Queen of the Minor Key” title track, and this will be Eilen’s signature song from henceforth, and it should be because it’s an example of master song craft. However I think this is also one of the elements of this album that sucks people in and allows them to gloss over the album’s shortcomings, which is not necessarily a bad thing. The song is so good, it’s goodness bleeds over to the other tracks.

The other top notch element to the album is the big body Gretsch guitar work of Jerry Miller. When I saw Eilen play live this summer at the Pickathon Festival, I called Jerry Miller the best player I saw all weekend in regards to taste, and there a chance he’s one of the best guitar players I’ve seen all year. His work on Queen is extraordinaire, and the same can be said for all the contributors, including singers Zoe Muth and Big Sandy who both appear on the album.

Jerry Miller’s talent level is so domineering though, it diffuses the attention from Eilen, where it should be. It almost becomes one of those situations where he’s so good, for the greater good of the music it may be necessary to reel him in, cut his solos shorter so the focus of the music doesn’t get blurred. If the name of this band was something else, and Eilen Jewell just happened to be the singer, or even if you called it “The Eilen Jewell Band,” this transgression might be more easily overlooked. Wayne Hancock had a hot shot telecaster player for years named Eddie Biebel, possibly the best to ever play that position, but you never went just to see Eddie, you went to see Wayne, with Eddie on guitar.

The other thing that bothers me with this album is that it is steeped a little too much in anachronistic language and modes. Good neotraditionalist artists know how to pay forward traditions and styles, but still make sure the music and message is germane to modern day. I’m not sure if Eilen always pulls this off in Queen. With songs like “Band Bang Bang” and “I Remember You,” they sound a little too close for comfort to songs that would’ve been played back in the day, rather than songs with roots from back in the day, but still interpreted with a relevant feel. At some point a feeling of hokey-ness can set in and distract from what overall is Eilen’s good songwriting, and excellent arrangement and instrumentation.

In the end, I just want more from Eilen Jewell. Her singing is good, but she never really lets it fly. Playing live, most of the time she is just shaking a tambourine or maracas, and waiting for the guitar solo to end to eep out the chorus. And one of the reasons I want more from her is because I know what she’s capable of, from songs like “Queen of the Minor Key” and some of her previous work. There’s too much Norah Jones here, too much safety.

Please don’t misunderstand, I like this album and Eilen Jewell. If you want glowing reviews for this album, just hit up Mr. Google and you can find reams of them. And my motivation here is not to turn anyone off if they already think this album is great. Heavens knows, its hard to find music that really speaks to you these days, and it’s not my place to make any one second guess their Eilen Jewell passion. What it is my job to do is to give my honest opinion, which is that this album features an excellent song, and damn fine guitar player, good songs and arrangement, and is better than most albums you’ll find out there. It’s just not the best.

But listen below and judge for yourself.