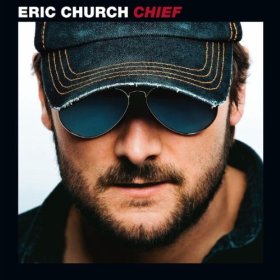 As we move to summer’s second offering by this supposed crop of “New Outlaws”, I can’t help coveting the idea of scrubbing Justin Moore’s awful country checklist music, but keeping his down-to-earth, aw shucks attitude, and exchanging it with Eric Church’s arrogant bravado. Maybe then we would at least have a New Outlaw that would be likeable, if not good. Because every time you talk about Eric Church, you have to preface it by saying what an arrogant prick he is. Now that we’ve got that out of the way, let’s not let Eric’s attitude effect our opinions about his music, and give Chief a fair spin.

Out of the box, it is important to note that this album is not country in a traditional sense. This is not necessarily a criticism, just an observation. I would call it more “progressive rock country”, or something. Certainly there is country elements here, but if Chief has a recurring theme, it is the introduction of electronica and new sounds into the mainstream country format. Some of it is studio magic, stuff that cannot be re-created live, at least with authenticity. Some of this progressive approach is segregated at the beginning or ending of songs. But some of it creeps into the full song structures as well and makes for quite an interesting album.

I do not hate this album. It’s not great or good, but it is decent, and if anything, Eric Church deserves tremendous credit for creating an album that is this far off Music Row’s well beaten path, and goes beyond the simple back and forth between love ballads and braggadocios laundry list songs. There is some laundry list elements here, and love songs, but there’s a mess of songs that are neither. There’s some boldness, some risk, and some innovation, and some roots. These are things that are just not supposed to happen on a project originating from Music Row. Eric Church might not be an Outlaw, but he is certainly being “new”.

The first track “Creepin'” is one of the best of the album. A dirty, swampy approach with a hoodoo backbone and tribal beat, swimming with tasteful layers and effects that make a very engaging and unique composition. There are some elements in the song I might normally call foul on putting in a country song, but the whole approach works, and works well.

“Drink in My Hands” and “Like Jesus Does” both have a little of the laundry list tinge to them, with the former also falling into the safe Black Crowes guitar approach, and the latter feeling like it is pandering to a constituency, but they’re not bad for mainstream fare. “Hold On” is a catchy, straight up rock song, with little to no sonic attempts to fit it into the country format.

I was immediately struck by the tones and style of “Hungover & Hard Up”. Definitely not a country song, but very unique, with a little of a reggae beat, mixed with a Motown feel, but overall, this music is hard to place at all, which is a good thing. Too bad the lyrics are a little dull. Just because the approach of this album might be progressive, the words do not always follow suit, like with this song. They are very commonplace in an otherwise unusual approach.

I’ve already written a review for “Homeboy”, and I will recuse myself on “Country Music Jesus” for a song review once the whole story is told. “Jack Daniels” is a little funky in the Larry Jon Wilson mold, though I’m not sure Church could recognize that name. But this song has been written dozens of times, and is easy to pass over on the album.

“Springsteen”, just like “Hungover”, immediately struck me as something wholly unique, but in this track instead of being progressive, he crosses the border into creating pop. It feels like a Cars song in places, mixed with the reminiscent, country checklist formula. This song is a good idea that tries too hard and flops. The cadence of the words feels forced, with the lilting “Springsteen” lyric shoehorned into a dreamy, docile chorus that I admit some will find very catchy. “I’m Getting Stoned” is where the idea of adding a progressive approach to mainstream country songs went too far. Though the lyricism in this song is pretty good, maybe one of the better lyrical songs of the album, Eric Church is not Radiohead, and shouldn’t try to be.

“Over When It’s Over” is where Erich Church gets the balance right of bringing his new school approach to what is traditionally thought of as a traditional format. Along with the opening track “Creepin'”, it bookends this album with two strong offerings, that aren’t just enjoyable to listen to, but just might create an influential work that sees some of these elements and approach end up on other mainstream albums.

By the end, for all the positives from the progressive elements in the songs, you feel like playing it a little more straight might have accentuated the unique tracks and elements in this album better. He tries, and does what Sugarland’s ill-conceived “Steampunk” idea tried to, which is open up some new sounds to the country format. But maybe he tries too hard at times. And though there is a lot of new here, it is still grounded from a lyrical standpoint on what makes mainstream Nashville turn. Right when I was really getting into the groove of “Over When It’s Over”, here comes a cheesy Marlboro reference.

There’s not a lot of twang here, and if you come from the independent/underground country world, you’re bar may be set too high for Chief to hurdle. Whether it was Eric’s approach or businessmen in suits, as bold as it is, it is not bold enough to break all the tethers of Music Row’s bonds, and there’s just enough elements here and there to remind you of why even at it’s best, mainstream country falls just a little short from it’s safe approach.

But from a mainstream perspective, understanding this album came from the putrid, vapid depths of Music Row, the very place where dreams go to die, Chief is curious, bold, fresh, and refreshing.