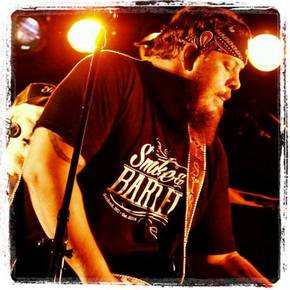 He doesn’t have the name recognition or touring muster of Dale Watson or Whitey Morgan. He never got the taste of the mainstream or the industry prestige of Gene Watson or Daryle Singletary. You won’t see him on the Grand Ole Opry or the Americana Music Awards. But when it comes to classic country honky tonk music, Eric Strickland and his ‘B’ Sides from North Carolina have held up their end of the bargain to keep country music alive for now three solid country music records that remind you not only that true country music is not dead yet, but there’s still emerging acts out there to discover.

I can still remember listening to Eric Strickland’s first official LP release Honky Tonk ‘Till I Die from 2012 and nearly losing my mind from how this guy had flown under the radar for so long. The album went on to be nominated for Saving Country Music’s Album of the Year, and was later recognized by Dale Watson’s Ameripolitan Awards. His followup from 2013 I’m Bad for You was a solid record as well, maybe just a little rushed after the first release, but it kept the momentum rolling. With some new themes, and allowing plenty of time for the material to mature, Strickland’s new record Revelate is a welcome sound to hungry ears looking for classic country that doesn’t just sound country and carry similar themes to the great music of the past, but also has something original to say, and is styled and executed with skill and quality.

The problem with country music today is most certainly not a lack of local bands that will turn on a phase guitar and mimic Waylon half beats while bitching about how Nashville sucks and how badass they are. The whole Outlaw and honky tonk realm has almost become like a bad parody of itself in the last few years, brow beating listeners and themselves about how country it all is like the self-mutilation rites of a Shia cleric, with only a few bands left with records worth spinning.

There’s a bad misconception that the more country an album is, the better it must be, but you still have to start off with good songs, fresh ideas or perspectives, and talent that is singular in a scene stacked to the ceiling with bad impressionists. This is where an artist like Eric Strickland comes in. He was born to sing, and The ‘B’ Sides were born to back him. It isn’t just REAL country, it’s real good. 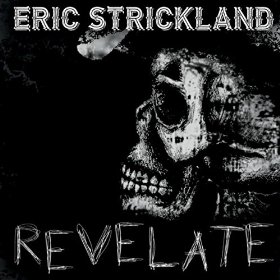 Revelate is not a concept album by any stretch, but there is an underlying theme here, and it marks something a little different from Eric compared to his previous two records. Revelate is dark, dealing with the emotions of heartbreak, and the realities of death in a way Strickland has only touched on in passing before. The two songs in the center of the album, “Skeleton” and “Reaper’s Blues” continue the trend started by the cover art, and the album ends with an infectious, groove-laden rendition of “John the Revelator.” The pondering of mortality, both of the individual and of the World is central to Revelate.

But don’t worry that Eric Strickland has gotten too deep on us or gone all Gothic. This new record is still filled to the brim with country heartbreaks songs, shit kickers, and excellent country music in a variety of classic styles. One after another Eric Strickland serves them up, songs like “Same Old Me,” “Have a Heart,” “Already Gone,” and “Under The Bottle,” while the ‘B’ Sides easily slither between the styles of country swing, honky-tonk, and Outlaw like it’s nothing. About the only song whose magic felt a little stale was the opening number “Aces & Eights.” The Waylon phase guitar has just been ruined by too many impersonators, and the lyrics didn’t match Strickland’s standards. But there’s a great duet with Kendra Hope called “Strangers,” and every Strickland record seems to have a barn scorcher, and on Revelate it is the unstoppable “How Gone I’m Gonna Be.”

It’s the combination of Strickland’s songwriting, and his amazing North Carolina-bred country voice that give you that tingle only true country music knows how to evoke. His frequent collaborator Gary Braddy also pens some of this album’s best songs, while the ‘B’ Sides continue to be one of the coolest backing bands in country music.

READ: Eric Strickland’s “Honky Tonk Till I Die” is a Gem

Family, circumstance, age, business affiliations, an artists willingness to compromise, and all manner of other factors go into why some artists get super famous and others spend most of their time spinning their tires in local scenes. But name recognition is rarely synonymous with quality, especially in this day and age in country music. Yet from the sheer quality of his work, Eric Strickland is slowly becoming honky-tonk music’s worst kept secret. Sorry North Carolina, but Eric is just too good for you and you alone.