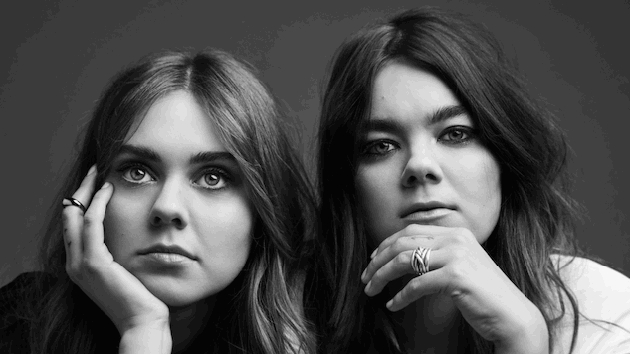 The gaze of the American roots consumer is too often criminally angled just over the heads of Swedish-born sisters Klara and Johanna Söderberg, known collectively as the singing duo First Aid Kit. Nowhere country enough for the shit kickers, way too esoteric for American pop, too involved for folk, the muse of the sisters instead procures it’s own path forward somewhere above it all—an amalgam of archaic music forms conveyed through a modern, but still roots-entwined perspective.

The Söderberg sisters don’t just sing, they soar. Their harmonies are so angelic and adept, the siblings come across more like deities than entertainers, untouchable and ethereal, blessed with immortal capacities, and brought to the Earth only to convey their wisdom in sonnet and rhyme. You fancy they’re more fantastic than real—Johanna’s face like that of a porcelain sculpture, Klara’s insight like that of an ancient ancestor, and the conjoining of their voices in harmony almost too pure for earth-bound ears.

That is why it is a little bit surprising that on this, their 4th full-length record, primary songwriter Klara Söderberg chose to show us that she too could indeed bleed human blood. A traditional breakup record in many respects, Ruins chronicles the onset of emotions brought on by Klara’s separation from a recent beau, and sibling tension within the band. So after an elongated period where the sisters decided to take some time off to catch their breath after a rapturous ascent starting when the two were still teenagers, Ruins is an exhalation of thoughts as they enter a more stable era of early adulthood.

Unlike many roots bands, America must share First Aid Kit with other ports of call, primarily their native Sweden, and the UK. Yet Ruins also has a decidedly American thread woven into its narrative. Produced by Tucker Martine of My Morning Jacket fame, it was recorded in Portland, Oregon at Flora Studios, and features appearances by American musicians Peter Buck of REM, and Wilco’s Glenn Kotche. Also, Klara and Johanna wrote the album while staying in Los Angeles, with Southern California’s sunny disposition contrasting with the sister pair’s dour moods. 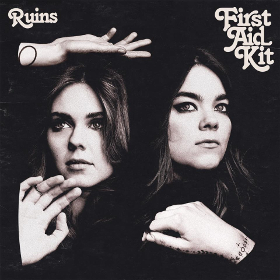 Ruins has a handful of riches to add to the duo’s already impressive resume of musical “moments”—meaning those times where you don’t just enjoy a song or lyric, but a literal shiver runs down the back of your spine, and you emerge from the listening experience a changed person, whether in a mild or monumentous capacity. It’s the crescendos, the sage perspective conveyed in the verses, and the serving of it all with such precise taste and individuality that make First Aid Kit much more than just another Americana band.

The song “Fireworks” might be best at encapsulating the sea of emotions the sisters have endured over the last few years between their previous release, Stay Gold. The album’s final track “Nothing Has To Be True” finds the magic that made the appeal of First Aid Kit cross borders and major bodies of water in the first place, stimulating the imagination with the sonic landscapes the duo seems especially adept at painting. And even though the early promise of Ruins as possibly First Aid Kit’s most rootsy or “country” record yet doesn’t really pan out in complete form, the song “Postcards” definitively fits the bill as a honky tonk breakup song, and one of the best offerings from this new 10-song set.

But it would be less than truthful to not say that it felt like a bit of the magic that marked the previous two records from the duo had lost some of its shimmer on this new one. It may not be the fault of the songs, but those grand “moments” that made First Aid Kit so enthralling on past efforts don’t soar as high on Ruins, and the moments themselves are perhaps a bit farther in between.

First Aid Kit always has a few songs you may tend to pass over, like most any recorded effort. But Ruins may have a few more of them. Instead of well-timed string sections breathing that extra bit of enchantment into a song and taking it to the next level, we get the drunken pub singalong of “Hem of Her Dress,” complete with blaring trombone. Even the videos—which have been one of the bedrocks of the band’s career—were a bit more ephemeral and ironic this go ’round, instead of rising to the challenge of putting such increadible audio vistas into a visual form.

But this record is called Ruins for a reason, and it still contains plenty of reasons why it would have been such a tragedy if First Aid Kit hadn’t made it through the personal turmoil to this point. The fact that making music is very hard is expertly hidden by brilliant musicians who make it appear so easy. The repetitiveness, the travel, the closeness with one another, the emotional toll of having to bear your soul nightly on stage can make it even more of a grind than what the most monotonous job may appear to require.

Yet they persevered. And even though you would swear Klara and Johanna Söderberg are beyond this world by what they’re able to achieve when they rise in song together, they apparently hurt and crumble as well. Yet even from rubble and ruins, they can still rise.