An album like Western Gold by Gethen Jenkins is important because it doesn’t just announce your next favorite album, it announces your next favorite artist. Gethen Jenkins is not exactly new to the scene. He’s played some 1,000 shows, including opening for the likes of Whitey Morgan, Dale Watson, Billy Joe Shaver, and others. But Western Gold is the moment where he brands his stamp on the traditional country and Outlaw music movement, and folks far and wide should, and will pay attention.

A retired US Marine who served eight years in Iraq, Gethen Jenkins committed while in the combat zone that when he arrived back stateside, he would pursue country music as a passion, and a profession. Originally from West Virginia, and raised in Alaska, the thick accent is no put on, and neither are his roots. But he’s made Southern California his base of operations since returning from Iraq, and for the last few years has been instilling the California country scene with a honky tonk and Outlaw kick, creating a foothold and appetite in the region for a new generation of hard country fans and performers.

Gethen Jenkins released an EP in 2017 called Where The Honky Tonk Belongs, and though it was a valiant effort and a worthy introduction, you wanted a little bit more before anointing him to the upper class of today’s Outlaw country performers. There’s just so many of these beard acts with thick Jamey Johnson accents running around making honky tonk music these days that at times it can come across as generic. You really have to figure out a way to separate yourself from the herd if you want to pursue country music in that space. 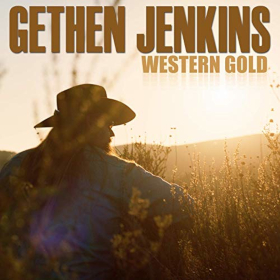 That’s exactly what Gethen Jenkins does on Western Gold, not just by relying on pounding bass drum and twangy steel guitar, but by penning songs of substance, and them singing them with conviction in super well-produced arrangements. Sure, there’s not much new to the themes of some of the opening songs like “Bottle In My Hand,” “Heartache Time,” and “Whiskey Bound,” though this is what will perk the ears of listeners who love that hard-edged Whitey Morgan-style country. But when Gethen launches into the super soulful “Waiting” complete with backup singers, or the really sweet “Stregnth of a Woman,” this is when you know you’re not dealing with just another “Outlaw” country artist coming down the conveyor belt with a bad attitude and phaser on his guitar.

What might set Western Gold most apart is just how superb the entire project came together. Even some of the songs that feel a bit like honky tonk cliches are rendered incredibly enjoyable by the excellent production and arrangements by producer Vance Powell. The six-time Grammy winner possibly best known to country fans for working as the engineer and mixer on Chris Stapleton’s Traveller makes sure every single song is super well-played and arranged. Powell really puts magic into each one of these tracks, as do the players. Top notch steel guitar and telecaster, drums, bass, and, backing singers when they’re called for result in this record having a great Southern and soulful feel. Western Gold is full-bodied.

Gethen Jenkins writes or co-writes every song on the record, with songs like “Stregnth of a Woman” and “Western Gold” being all his own. Chris Powell plays drums, and Leroy Powell plays guitar, David Gilliard who’s been with Gethen for eight years is on bass, Michael Webb is on the keys, and Dan Dugmore plays all the excellent steel guitar on the record that really helps to make every song stand out.

And possibly the best production decision was to dry out Gethen’s accent just a little bit on this new record. On his original EP, at times you felt like his vocal inflections were a little bit of a put on, almost like since he was the new kid on the scene living in Southern California, he sensed he needed to really prove himself and bolster his country cred. Western Gold sounds like the real Gethen, authentic to himself and his roots that have ties to both the Appalachian South, and Western landscapes.

Western Gold is really nothing more than just a straightforward honky tonk Outlaw country record, but that’s also what’s so great about it. And the guess is after this album, you’re going to be seeing the name Gethen Jenkins a lot more on playlists and festival bills right beside the other big names of the era helping to keep traditional country alive.