The propensity of the Drive By Truckers to get political on your ass, and just a general “like but not love” feeling I’ve had for their music over the years means I really don’t have a dog in the race when it comes to the whole Jason Isbell vs. Drive by Truckers tilt that’s been going on since he left the band a few years ago. When I saw him perform many of the songs from Here We Rest live at South by Southwest, I honestly had trouble keeping my attention on the stage. I’ll blame this partly on him flying without his “400 Unit” band, though he did have the fabulous Amanda Shires backing him up on fiddle, which in theory should have kept me more engaged. But it didn’t.

When this album was released a few weeks ago, the fervor with which many critics that I have respect for sung its praises made me retool my plans of ignoring it. And I have to say, I like it, or at least parts of it. Though I will have quite a few criticisms of it, it is more good than bad. 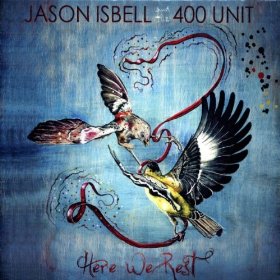 The first thing you need to know is this album contains an excellent song by the name of “Codeine” that captures with absolute brilliance that strange, depressing state of mind in the infant stages after a breakup: the little jealousies, the cold realizations of the changing of very mundane things. It also has a very good song, “Alabama Pines”. If you’re an album cherry picker, this is where to start.

Those two songs work great despite owning some of the same issues plaguing the whole album. Everything is so blended, so slick and produced to the point of rendering the album unnecessarily docile. Though there’s some good writing, there’s not one lyrical line that really hits right at your heart, not one instrumental performance that gets your heart pumping. In fact there’s not really any instrumental “solos” in the traditional sense on this album at all. “Slick” should not always be a bad word when describing music, but “safe” certainly can be.

Something tells me that the target audience for this album might get their news of the day from . . . I don’t know . . . let’s say Terry Gross. Maybe they like to spend their weekends with Ira Glass narrating little stories about This American Life. In other words, Here We Rest has the NPR effect on roots music phenomenon going on in full effect. Don’t get me wrong, I like NPR and appreciate its undeniable support of roots music, but it’s huge, overeducated audience might be causing gentrification in roots music, and this album might be the best example yet.

But in Jason Isbell’s defense, he was one of the pioneers of the “roots without pointy edges” sound to appeal to the affluent. When Old Crow Medicine Show brought producer Don Was on board to hone this type of sound, or when when Justin Townes Earle brought it to the production of Harlem River Blues (which Jason Isbell appears on), they did it at the expense of their past, of what made them appealing in the first place, ripping their roots out of the ground so to speak to appeal to a wider or a different demographic. This feels like a deeper sin to me than Jason Isbell doing what he does well.

And though most of these songs, including the two praised above, are constructed using very transparent formulas, I believe in gauging music not only on its independent merit, but against the abilities and limitations of the artist himself. Look, I’ve never thought of the Drive by Truckers as excellent songwriters, players, or singers. They had an appeal beyond those measures by bringing a hard-working, blue collar approach to their music. And I honestly feel like Here We Rest is Jason Isbell putting it all out there, leaving nothing in the tank, and stretching his limits. He made the best album he could muster, and that elevates it more than the appeal of the music itself.

But when I hear these songs, I can hear a formula. The songs “Go It Alone” and “We’ve Met” are probably the easiest examples, though I acknowledge their wicked catchiness and appeal. They use the formula, because the formula works.

The drums at the beginning of “Stopping By”, like a few times in this album, make you feel like you’re being transported back to the mid-late 1990’s when that polished “alt-country” sound was riding high. The problem is there’s nothing new here, and nothing old either. There’s no serious tie to the roots, and no innovation. The song “Never Could Believe” tries to be dirty, not from authenticity, but as a production approach.

Two songs I found wholly unappealing were “Heart On A String”, that tries way too hard to be white-boy soulful, and “The Ballad of Nobeard”. Isbell is no Tom Waits, and Here We Rest is no Swordfishtrombones. I understand wanting to add spice to an album, but this was ill-conceived.

But “Daisey Mae” works, and so do most of the songs when you boil it all down, and so does the album. Despite the transparency, the songs are enjoyable to listen to.

If you’re looking for twang or heart-wrenching songwriting, you might want to grab “Codeine” by itself and keep trucking. But if you like good songs that are easy to listen to and grip you on first or second listen, this may be right down your alley.