It’s a good thing that Jon Pardi is a big guy. Because bravely, and with little regard for life and limb, he’s chosen unilaterally to use himself like a human bulwark against the invading hordes of pop, hip-hop, and EDM descending from the surrounding hillsides like unwashed hordes of undead creatures looking to consume every last bit of roots and twang still left clinging onto the picked-over carcass of mainstream country by releasing an album that actually sounds like country music cover to cover. My God, give this man a medal of honor, and pray for his soul.

It’s not that that the previous works by Jon Pardi haven’t helped define that hard country edge of the mainstream, because they have. But on his new record Heartache Medication, this is not country music by close approximation, or considering it on a sliding scale based off the output from peers on Music Row. It’s By God country, aside from a few little forgivable vestiges that invariably work themselves into something produced on the affluent side of Nashville.

Twang, fiddle, steel guitar, songs about drinking and heartache, it’s all here, and in ample doses, and from a guy who isn’t just a bit player or 3rd tier personality in popular country, but a performer who’s often getting to play to arenas, has two #1’s on radio, five Top 5’s, and another song climbing the charts as we speak that starts on the fiddle and features an honest to goodness steel guitar break. Pardi will also have his second #1 album in a row when the stats for Heartache Medication come in.

Jon Pardi put his music where his mouth was on this record, making good on the promise to double down on his roots, and do it his way. Co-produced by Pardi himself and including seven Pardi co-writes, this is a guy on the cusp of breaking out taking a chance that the next trend in country music will be country music, and being willing to lead that charge or come back on his shield. He’s even willing to cut against the grain by putting out a song called “Old Fashioned” and another called “Call Me Country” that confidently calls out what country music has become by referencing guys like Merle and Hank, and lyrics by Waylon and Willie, and how they’ve become ghosts on the radio. 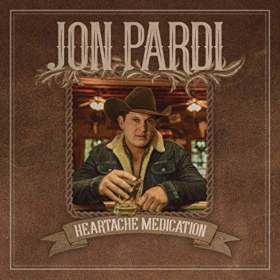 As fun and fist-pumping as these songs are, possibly the two best tracks from the album are “Ain’t Always The Cowboy,” and the next to last track, “Love Her Like She’s Leaving.” Though you wish it had an additional verse, and the Richie Sambora-sounding guitar solo is a bit out-of-place, “Ain’t Always The Cowboy” really stirs the emotions in how it turns the tables on the rowdy cowboy and makes the girl the one riding away with someone’s heart. “Love Her Like She’s Leaving” with Dean Dillon as a co-writer leaves a mark on your emotions as well with its well-placed reminder to appreciate what you have.

But as is said often around these parts, just because something is real country, doesn’t mean it’s real good, and to be honest, the drinking songs grow a little weary during the 14 tracks of Heartache Medication. It’s not that “Me and Jack,” or “Tied One On,” or “Buy That Man A Beer” are in any way offensive individually. But the same theme starts to get tedious one song after another. “Tequila Little Time” may get you to let out a little chuckle at first, but the sandy beach bum styling of the song reminds you too much of bad Kenny Chesney. And though “Don’t Blame It On Whiskey” is one of the most talked-about songs on the record since it was co-written by Eric Church and Miranda Lambert with Lauren Alaina singing harmony, the folk-style beginning saps some of the energy out of what is otherwise a decent song.

If you’re a strong independent country fan who regularly finds themselves spinning records from Cody Jinks, Tyler Childers, and Mike and the Moonpies, Jon Pardi’s Heartache Medication is likely to leave you wanting a little more, if the contemporary introductions to “Old Hat” and “Oughta Know That” don’t turn you off completely. But you do have to consider the greater implications of a record like this when grading it beyond your own listening priorities. The release of an album like this in the mainstream truly is remarkable. But you do feel like Pardi could have done a bit better writing and selecting songs to open up some different themes, and with a voice that’s fine by not stellar, the right material is key.

The resurgence of more country-sounding material in the mainstream in the aftermath of the zombie apocalypse that was Bro-Country is real and resounding, and Jon Pardi has been a spearhead of that movement ever since his last record California Sunrise did surprisingly well, and continues to be one of the top releases in all of country each week. He’s still willing to collaborate with his contemporaries in the mainstream. He’s not out there hard cussing his fellow performers. He’s leading by example and being a gentleman about it, proving that strong country sounds can still be successful to wide audiences if they’re just given a chance, and opening doors for other performers to do the same.

Heartache Medication will go on to compete for the best country record in the mainstream in 2019. Some will poop on it simply because it is from the popular side of country, while others may laud it too much simply because it’s head and shoulders above its mainstream competitors. But no matter where it lands in your little country music ethos, it’s undeniable Jon Pardi is putting himself in a leadership position towards returning twang to country in all its forms with Heartache Medication, and that should be universally applauded.