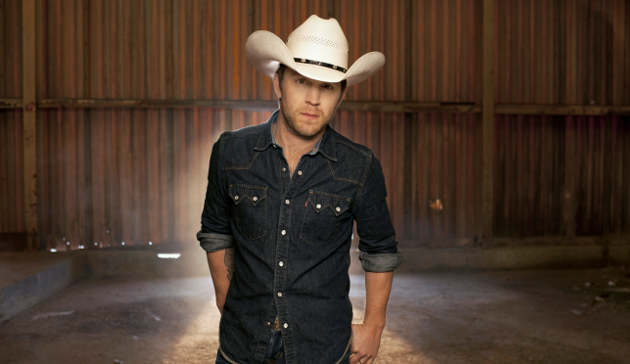 One of the biggest roadblocks to being able to buy into many popular country music performers is the personas they must present to the public at the behest of their major label handlers. You don’t know where the real person ends, and the marketing and image begins. And sometimes, neither do the performers themselves. Almost like a fantasy movie, it requires the suspension of disbelief to regard what you’re seeing as real, because rarely any of it is. And once these performers parrot the same marketing lines for years, they begin to believe the myth themselves.

Justin Moore suffers from this dilemma perhaps more than anyone in the mainstream. His self-proclamation on the 2011 album Outlaws Like Me released on Big Machine Records was way more about marketing than honesty, and put him in the cross hairs of many. Though Moore’s little niche in the mainstream is one of a traditionalist since he wears a cowboy hat and sings with a strong Southern accent, his 2013 record Off The Beaten Path, and then 2016’s Kinda Don’t Care saw him careening further and further from his country roots until he was nipping at the heels of Keith Urban for one of the biggest sellouts in modern country music history.

When you’re a 2nd tier country star, sometimes there’s even greater pressure than those in the 1st tier to put a run of songs together and bust into that headliners status, and this is often where you see artists stretching their boundaries, compromising their sounds, and selling their souls to not just succeed, but just remain signed to their major label contract. Justin Moore’s last album Kinda Don’t Care felt very much like that case.

But just like we’ve seen from many mainstream country performers recently, from Blake Shelton, to Reba McEntire, to Jon Pardi, to Randy Houser, making your album more country is the hot thing at the moment. Of course this is all relative since the baseline from where many of these performers started at was not very country at all aside from symbolic gestures and lyrical dog whistles. But Justin Moore might be the one of those to overhaul his sound the most, and aside from a few moments of contemporary styling, delivers a pretty damn solid country music album cover to cover in Late Nights and Longnecks. 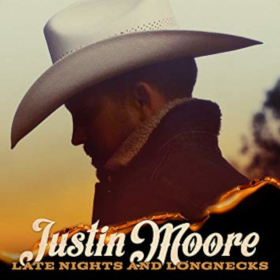 Now granted, just because something is real country, doesn’t mean it’s real good, and Late Nights and Longnecks may be a good example of this. Though there are a few pretty good songs here, there is also some pretty shoddy writing at times as well. The song credits on the record are almost solely held by Justin Moore, and a brain trust of Jeremy Stover, Chase McGill, and Paul DiGiovanni, offering not a lot of variety. And though overall the record is country—especially for the mainstream—there are a few moments where electronic beats introduce the rhythm, and the guitar veers well beyond the established tones of the country genre.

Late Nights and Longnecks is a drinking record aside from a few select cuts, and those quick to criticize the consistency of the themes of this album better go re-listen to their favorite Whitey Morgan and Johnny Paycheck records before they stick their foot too far in their mouth. But Late Nights and Longnecks is not just all about beer keggers around bonfires. “Never Gonna Drink Again” and “Someday I Gotta Quit” speak to the consequences of imbibing in alcohol and other addictions, and “Jesus and Jack Daniels” is about the dichotomy of the South’s strong cultural influences, even if this idea has been done in song dozens of times.

There’s a few really good songs on Late Nights and Longnecks like the pleasantly sincere “On The Rocks” and “Someday I Gotta Quit.” And even though sappy songs about supporting the troops and evoking the memory of tragedies is its own type of virtue signal, “The Ones That Didn’t Make It Back Home” is hard not to feel the emotion of. The opening track “Why We Drink” is your basic country drinking song, but a good one.

Yet Justin Moore also leans so heavily on list style lyrics indicative of early Bro-Country that it renders many of these songs cringe worthy for listeners that don’t seek out that specific brand of radio-friendly country music. “That’s My Boy” is all about bragging how country you are. And though “Good Times Don’t” may be the most country-sounding composition on the record and there’s a good idea behind it, the list-like lyricism ruins it.

What is hard to deny is how hard and heavy Justin Moore and producer Jeremy Stover leaned on the steel guitar here, and country’d this record up. A few songs blow right through the Nashville slick studio production stop sign of 3 minutes or less, and allow the session players to track licks for a couple stanzas too long to stretch their legs in a way that’s nearly unheard of on a major label record.

But perhaps the greatest compliment to be paid to Late Nights and Longnecks regardless of the regular appearance of critical faux pas is you feel like this record is the real Justin Moore. It may not be great, and it’s downright bad in some spots, but you can take Justin Moore at his word when he says this is the kind of record he wanted to make, and saw it through. That in itself is admirable, and an achievement.

Almost irrespective of anyone’s personal taste on the outcomes, if the artists under control of Music Row were allowed to just be themselves and call their own shots, the music would see a marked improvement across the board, even if many snobbish independent/Americana music fans would still refuse to listen to it. Justin Moore’s Late Nights and Longnecks is a good illustration of that and probably the best album of his career, even if it falls a bit short of being a good illustration of great country music, beyond comparing it with its peers in the mainstream.