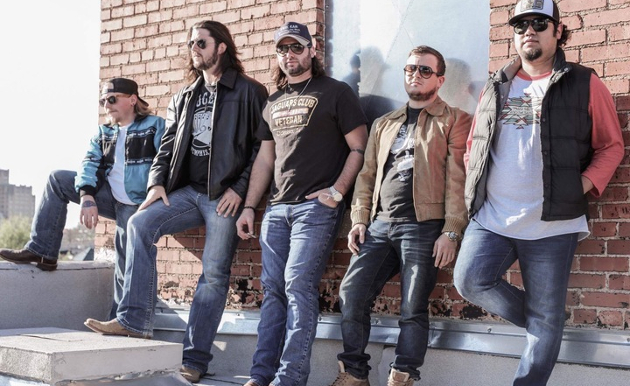 Koe Wetzel from Stephenville, TX has certainly been stirring up the chatter of both the positive and negative persuasion over the last few months after the release of the record Noise Complaint. A veritable young pup of the Texas music scene, he’s been vilified by some for immature lyrics that speak to lewd behavior, while being celebrated by the younger set of the scene as someone who’s bringing an edgy, energetic, and deceptively deep approach to a movement where the stars continue to get older. Despite its size and expanse, the Texas scene is still a scene, and even the slightest little disturbance can be exacerbated into what some consider an existential threat via incessant internet chatter, and it seems everyone dialed into Texas music loves to fall on one side or the other of Koe Wetzel fandom.

The worst part about this album is the title, the cover, and the introductory track, which are about as smooth of a move as meeting your girlfriend’s parents with your penis is hanging out of your zipper. It’s not just inappropriate, it’s not even really illustrative of the music when you drill down. “This album was made for one purpose and one purpose only: To get chicks,” says the intro track in a chipmunk voice. Surely there is at least some sarcasm in the intro, but talk about starting on a bad foot. Yes, there is some jackassedry on Noise Complaint along with a host of other concerns, but my take on this album is probably something different than you would expect for someone who likes to celebrate substance over carefree, vapid listening.

First, I wouldn’t consider Koe Wetzel a typical solo Texas music artist. I would consider this a band that happens to go under the name of the frontman, singer, and principle songwriter, Koe Wetzel. That seems to be more of the approach to the music, and the marketing. They just sound like a band too, with a decidedly more rock style than country. In fact one of the criticisms you could broach is that the sound of Koe Wetzel, despite showing a lot of adeptness at constructing songs that are sonically fetching and appeal to a wide ear, is really inferred to a great extent by post-punk, post-Grunge late 90’s alternative rock. For those whom this era in music looms large, this is one of the big appeals of this band. But much of Noise Complaint feels like Koe Wetzel is mimicking a sound as opposed to crafting his own. 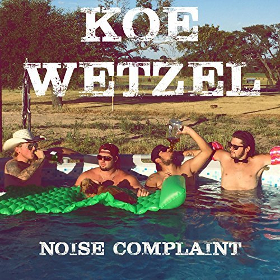 And yes, at times the lyrics of Noise Complaint can make you downright cringe, like a droning, drunken plead for someone to get poor Koe Wetzel some Taco Bell at the end of the song, “February 28, 2016,” or like in the opening song “Something To Talk About” when he sings about taking home a married woman, getting shot in the head by her husband, and then popping out of the casket to dance around at his own funeral. It’s not just the under-development of narrative, it’s a very juvenile approach at times that holds this record and this band back, and makes them more polarizing than their otherwise palatable sonic approach and sometimes poignant songwriting would afford. Koe Wetzel’s plight is not helped at times by leaning on braying power chords from the lead guitar as opposed to composition or lyricism for a song’s appeal. That may be fun for the band, but this is not 2001. There’s nothing more self-indulgent in 2017 than the power riff. We’re living in the era of the song.

Yet there’s something underlying here that makes Koe Wetzel more than just a screw-off band. You have to sift through the refuse sometimes, even though Wetzel and Company do try to illustrate depth in moments. It’s like they want to be a screw-off band, and they try to be a screw-off band, but the depth gets in the way. My estimation of Koe Wetzel is not of a young, wet-behind-the-ears outfit sowing their wild oats simply to score chicks. It’s of a songwriter with some really involved insight and an ability to articulate it through verse that has fallen in with the idea that he needs to be rambunctious to to exude cool and youthful energy.

Koe Wetzel, whether inadvertently or purposefully, captures the poetic nature of the drunken stupor, of the life veering off the skids, and of youthful indiscretion. Koe Wetzel and his bandmates are still young, and still in the nascent gestation period for a Texas music outfit. Wade Bowen and Randy Rogers fans may hear a band like this and think they need to grow up, and would prefer to hear something more the speed of Flatland Cavalry or Parker McCollum when it comes to the new up-and-comers. But you can’t fault Koe Wetzel for being himself, or themselves. It may be immature at times, but that doesn’t make it any less honest, or even enlightening in the way it speaks to a lifestyle and an era in life, and the joys and consequences thereof. 20-somethings in Texas music love this record for a reason.

This is not a feel good party album, despite how it may appear on the surface. There’s a lot of partying going on, but most of what makes it on the record is the aftermath. Temptation, doubt, and self-loating are all spoken to here. If anything, it’s when Koe Wetzel tries to get deep for deep’s sake when he gets a bit exposed, like the valiant, but somewhat failing “Honey Pain,” burdened by its repetitiveness.

What they got wrong here was the presentation. But what Koe Wetzel’s critics are getting wrong is that there’s nothing here but foul-mouthed recitations of bouts of drunkenness that offer little to no insight into the human condition. Koe Wetzel is still very young. Yet you get the sense through Noise Complaint that all the parts and pieces are here to really strike at something when a moment of sobriety enters the picture. Like most Americans (and Texans), the road through the early and mid 20’s is a rocky one, beset with temptations and wrong turns, still inferred by a religious and/or moral foundation that hopefully doesn’t get totally drowned out by debauchery, drugs, and alcohol, and eventually results in lessons learned, wisdom gained, and music that speaks to the deeper meanings and struggles of life when all those wild oats are sowed.

From Sturgill Simpson to Jason Isbell, to even a lot of the stalwarts of the Texas scene, it was those searching times of their early 20’s that went on to result in their most successful output in their 30’s. It’s just with Koe Wetzel, you’re listening to those drunken moments in the here and now. Koe Wetzel just needs to find his own sound, and his own style, and understand where the line is of what you should expose of yourself, and what you should wait to share via sober insight.

The present is definitely messy, but if he plays his cards right, Koe Wetzel’s future could be quite promising.