True country fans don’t need to be told that trying to hold onto the roots of the music has been a war of attrition over the last 20 years or so. As more legends and oldtimers pass away or get put out to pasture each season—and so often it seems the promising young names who are coming up through the ranks inevitably veer away from their original country sound—you search for stability and glimmers of promise as the heap of shoes to fill of the artists gone by continues to grow.

Over the last few years though, a strong contingent of country musicians whose fortitude is unquestionable and uncompromising have come together to form a nucleus of true country music for a new generation. They come from diverse and sometimes unusual backgrounds, but they’re all united by the purpose of keeping the music “real,” and not just as a marketing slogan.

On the surface, Flint, Michigan does not sound like a proving ground for a modern honky tonk hero, but that’s exactly what Whitey Morgan has become. At one point Sunny Sweeney was signed right beside Taylor Swift to Big Machine Records, and now she is a mother hen of hard Texas country. Ward Davis was a songwriter from Arkansas who had Willie and Merle cut one of his tunes, and has since turned into a strong performer to tussle with all his own.

And they’re all being managed by a man named Arthur Penhallow, whose stable at True Grit Management is becoming a good place to point your nose when looking for great country music, just like how Dave Cobb’s name emerged a few years ago as a common tie among many of the most promising voices and projects coming to the forefront in independent country. You can even put Canadian folk singer Colter Wall as a cousin to this cadre who are trying to build their own and industry apart from Nashville or Texas, even playing together this August at their own festival.

And at the forefront of this movement, and helping to shake things up in the country music space by posting swelling numbers like Sturgill Simpson, Jason Isbell, and Chris Stapleton did before him is Cody Jinks. He is the franchise of the current roots music insurgencency, and one who is untarnished by outside influences or swayed by wayward trajectories, regardless of his early experimenting with heavy metal before he found his righteous country music path. Now signed with Rounder Records, the latest release Lifers very well may be the moment that puts him over the top, foisting him from the looming periphery of independent artists lapping at the sides of the mainstream industry like annoying chop, to crashing over the bows like a tidal wave. 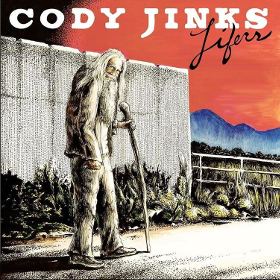 Lifers might not be the best record Cody Jinks has ever released, but that’s more a testament to the stout competition Cody has created for himself over his career, making such a feat difficult to impossible to attain. However Lifers might be the record best suited to introduce Cody Jinks to the hungry masses of country music fans looking for something authentic in an increasingly plastic and unfulfilling industry. It has the right combination of easy and amiable tunes to perk the ears of everyday listeners, while also delivering some of the more deep efforts Cody Jinks has forged his name around with his devoted fans.

Some artists build their careers behind major marketing campaigns or riding the wave of some short-term trend. Cody Jinks has build his momentum by singing songs that seem to be direct recitations of the lives of his supporters. His appeal to the self-proclaimed “flockers” is not that he stands on a stage and commands a superhero status, it’s that he feels just like one of them who happens to be the man in the middle of the spotlight. This is blue collar music, and not in the pandering way the mainstream handles such business, but in a way that fills the audience with meaning, self-worth, and assurance as individuals with strong backbones, worthy convictions, and value.

And it’s country, unquestionably. Cody’s career has never been dogged by questions about the authenticity of his voice, or concerns that his compositions could be considered more rock than country. The music of Cody Jinks is straight down the middle, but with its own unique character and wrinkles where it’s not a reenactment of anything. It’s true country music in the modern context, and his dedication to the music is what has led to the undying loyalty of true country fans.

Early songs from the album like the Josh Morningstar-penned “Must Be The Whiskey” and “Lifers” had some worried this record might be a little light on heavy material, but such is the head space some fans will get themselves into when a record is so highly-anticipated. “Must Be The Whiskey” is a grower for sure, and smart as a lead track. The third song released from the album, “Somewhere Between I Love You and I’m Leavin’ ” showed the slower, more touching side of Cody Jinks that we knew would emerge on the record once heard it in full.

Looking for deeper material, you also come across “Colorado” co-written with Ward Davis, and it doesn’t get much tear-jerking than the Billy Don Burns-penned “Stranger,” which was so highly regarded by Saving Country Music back in 2012 when Burns cut it himself, it became the Song of the Year. The Jinks version is respectful to the original, and most importantly, will serve the song to a greater audience. Then depending you speak to, the folksy and reminiscent “Head Case” that finishes that album might be the best of Cody’s career.

My heroes are all dying, or they’re sitting in a cell
Through the years of medicating minds that hurt so well
There’s a thin line don’t you see, between genius and insanity
Which am I?

There are a few tracks you may find yourself skipping over on Lifers, like the fun but mild “Big Last Name,” or the meandering “Desert Wind.” But the big expectations that precede a record like this are pretty well fulfilled by the end, while Cody’s worth is enhanced once again with songs and performances that reassure the opinions that he’s one of preeminent true country performers of our time.

The annals of country music are peppered with entries on folks who poked their head into the genre for a few years before deciding to jump ship or switch styles. But the folks who dedicated their lives to the music are the ones that history remembers most fondly, and receive their name in headers of chapters, helping to mark the guideposts of the music’s chronological eras. They’re the “Lifers,” who just like the people they sing for, take pride in their unwavering commitment to plying a trade behind a purpose, and the craftsmanship and heart they put into those efforts, knowing the music and its lineage will always be bigger than them, their work will be rewarded and judged most harshly in hindsight, and that country music holds no guarantee of sustaining into the future unless someone is willing to pick up the yoke left by their predecessors, and get to work.