It’s the common bane of most second and third generation music performers that they are expected to carry on the legacy of their parents in form and fashion, and perform up to a standard dictated by their pedigree that is often difficult to impossible to attain. But with the natural gifts for music making that Lukas Nelson possesses, nobody should ever want anything from him other than to be himself, and for everyone and everything else to get the hell out of his way. It’s almost a shame he’s Willie’s son, because it will make some question whether we’d even be paying attention to him otherwise, even though that answer lands resoundingly in the affirmative. The only thing keeping Lukas Nelson from being considered a superstar in this day and age is that he’s a roots rock legend in the making that came around in an era when EDM, hip-hop, and bad pop country where all the rage.

In the last couple of years, Lukas Nelson and Promise of the Real have really come into their own. Touring behind Neil Young, getting a big boost by appearing in the blockbuster movie A Star is Born, and just exhibiting an uncommon level of talent that couldn’t be kept a secret forever, Lukas Nelson and crew have worked their way into high regard and headliner status. Their latest record Turn Off the News (Build a Garden) is probably even farther than previous efforts from the country music legacy forged by Lukas Nelson’s famous father. It’s a full-blown rock affair for the most part, but no matter how your musical leanings tilt, you’re too busy laying back and losing yourself in the sweet vibes and calming of spirit this record imparts to worry about such trifles.

If there’s anything cousin to what Willie Nelson does in Turn Off the News (Build a Garden), it’s how wisdom is imparted through the sowing of parables that put the worries of life into perspective, and present a roadmap of how to find happiness, and how to live life in a fair and fulfilling way. Unquestionably, the verses of the title track are too trite and direct to be effective as poetic persuasion. But as this record plays out, the underpinning theme becomes quite convincing. Lukas resolved to not be political on this record, and practices what he preaches, which is not wagging a judgemental middle finger at anyone in particular, but instead making an effective argument that a simple and fulfilling life is achieved when you’re unwilling to succumb to the acrid nature of today’s media environment. Make no mistake, Lukas Nelson has opinions of his own. But he keeps this work free of them for the greater message of freeing yourself from the endless agitation cycle. 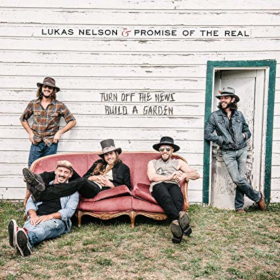 Don’t worry though, Turn Off the News (Build a Garden) is not a record of bubbling brooks and Buddhist platitudes. There is plenty of grounded songs about relatable themes, and ample invigorating guitar work from Nelson to keep this album well into the accessible category. Though Promise of the Real has its jam band tendencies, they keep the rock mostly classic on this record, sounding similar to Petty on the enveloping song “Where Does Love Go,” and reminding one of the Allman Brothers on “Civilized Hell.”

This album is just a great listen, easy to fall for and get into, with something for everyone, even if a few of the tracks don’t fit your sensibilities. Only a few weak quibbles can be lobbied against its favor, including the extra fluffy production and sentiment of the song “Stars Made Of You,” or the misplaced cuss word in the acoustic version of the title track ruining the mood. But there are plenty of songs like the punchy and bluesy “Save A Little Heartache,” or “Out In LA” that make this record hard to not continue to re-rack in the listening cue.

Turn Off the News (Build a Garden) might even be so accessible some will consider it too saccharine, and it’s true there are not those deep songwriting moments like Nelson’s last self-titled record had, songs like “Just Outside of Austin” and “Forget About Georgia” that were really moving. With an album that mentions gardening in the title, you may expect to get a lot more folk and acoustic songs. Instead Turn Off The News feels like a launching pad for a lot of loud and heavy songs you can expect to hear from Lukas Nelson and Promise of the Real live into the foreseeable future.

There is no shadow for Lukas Nelson to emerge from any more. He’s now casting his own shade over many individuals who may not have a famous name to help them along, but also don’t have the skill and magnetism in music that Lukas is blessed with. The younger Nelson also proves on Turn Off The News that has the temperament to carry on the other part of the Willie Nelson legacy, which is being able to break through the acrimony of the internet age, and bringing people together through the shared joy of music and the pursuit of simple happiness.

Purcahse from Lukas Nelson and Promise of the Real

Lukas Nelson, Lukas Nelson and Promise of the Real, Review, Turn Off the News (Build a Garden), Willie Nelson