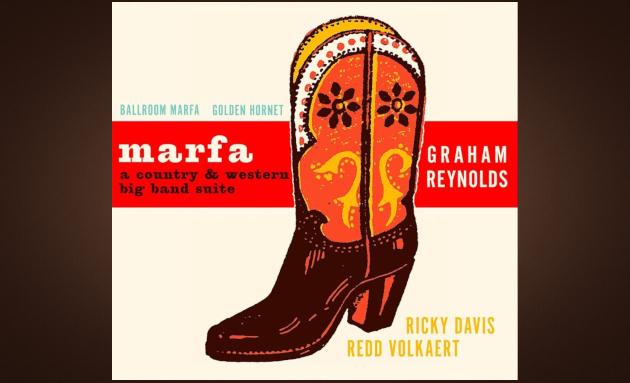 For those searching for something a little more elaborate and offbeat in the country and roots realm that isn’t just another litany of drinking songs and verse/chorus repetitions—something that lets the music create the tension, drama, and suspense as opposed to a poetry of words—this slightly fey, but fully inspired and involved work by Austin-based music composer Graham Reynolds is worthy of a spin.

Synonymous with Austin music, and perhaps best known by the outside world for composing the scores and soundtracks to numerous Richard Linklater films, Graham Reynolds is a diverse composer and bandleader dabbling in all manner of genres and mediums, and often with a brilliant command for whatever subject matter he chooses to tackle.

A Graham Reynolds projects is also often a collaborative effort, and for this endeavor he calls upon another Austin legend in Redd Volkaert, who is known for his work with Merle Haggard, and for his lead guitar mastery of honky tonk, Western Swing, and jazz—all of which come in handy for this particular enterprise. Also joining Graham is pedal steel player Ricky Davis, probably best known for working with Dale Watson, but whom also plays with many other Austin-based honky tonk bands. Add the Austin string quartet Invoke to the mix, and a few select horn players and other musicians from around A-Town, and they all conspire on this instrumental marvel called Marfa: A Country & Western Big Band Suite.

Don’t think of this as either a Western Swing or a Big Band record, because you’re likely to be rendered confused or disappointed. Consider it like one of those cool 70’s fusion jazz records with the primary flavor injection being the robust twang synonymous with classic country and Western. Though not an entirely original concept in itself, it has never been conceptualized quite like this before.

Marfa: A Country & Western Big Band Suite is a record that both Bob Wills and Frank Zappa would be duly impressed with. Ranging from classical, to jazz, to downright honky tonk, Graham Reynolds looks to both disentangle early American musical art forms into their respective disciplines like shining a light through a color prism, and then weave them back together in an attempt illustrate their similarities and intrinsic beauty. And the inspiration of it all is to capture in music the mystique and wonder evoked when one is in the midst of the small Texas border town the album is named for.

Known by many who study the supernatural for the strange and unexplained lights that can be seen from the edge of town, Marfa is a tiny spot in the Chihuahuan Desert with around 2,000 full-time residents that has bred wonder and creativity in artists and musicians for many years. Recently the town has gone from a well-kept secret to one of those spots that affluent whites from Austin and elsewhere love to travel to on weekends so they can brag about it on Instagram, endangering what is cool about the out-of-the-way vector in the first place. It’s not quite Santa Fe or Taos in coolness, but time slows down within the Marfa borders and it feels lost in time, with the intoxicating blend of cowboy, Spanish, and Native American cultures stimulating the creative mind and spirit, and helping to reset one’s perspective on the world.

Marfa: A Country & Western Big Band Suite is like a movie soundtrack that gets cut before the screenplay is written. Whether the plot is a love story, a heist, a Western, or something else, it is left up to the dramatic interpretation of the listener. The only parameters are that the story takes place in a 24 hour period within the environs of Marfa.

Beyond Graham Reynolds and his cohorts helping to capture the wonder and stimulation one can feel while in the presence of this unique place, perhaps most importantly this work presents the twangy sounds of a Telecaster and the lonesome moan of a steel guitar as high art, worthy of being considered right alongside string concertos and jazz bursts from a brass quartet as dignified expressions of music, with no degradation in status, despite the common stereotype that these country and Western tones are nothing more than the clatter of hillbillies. Of course astute students of country music don’t need this lesson, but others may, and the beauty of twang may have never been illustrated better than on this record. And who better to help illustrate them than Redd Volkaert, who years ago secured his place as the Godfather of lead guitar in the Live Music Capital of the World.

Marfa: A Country & Western Big Band Suite is sure to be a strange experience, just like a trip to Marfa. You have to be a little brazen to journey forth, but you will be better off for it, discovering certain truths about yourself and the world that were always right in front of you, and shaking loose of internalized thoughts and memories that weigh you down like burdens. Or perhaps you just discover some twangy and jazzy tunes that get you tapping your feet. Either way, Marfa is worth the drive.