So here we go. Once again I sit down to review an album originating on Music Row, which means some will have an immediate negative reactionary response about why their little Saving Country Music is selling out for a pop country star, while others will come to sing the praises of how Miranda Lambert is the one to save country music. With her new album Four The Record, Miranda proves that the truth, as it usually does, lies somewhere in the middle.

Though sonically Miranda may be one of the most “real” things on mainstream country radio, there is still a good amount of pop to her sound, and unlike a Jamey Johnson, or even a Taylor Swift, she does not write most of her own music, or produce her own albums. Having said that, Lambert has illustrated that she has somehow carved out at least a small amount of creative freedom in the stifling Music Row environment by being allowed to release her Pistol Annies side project, which for most Music Row artists would have been a non-starter. So independent of Four The Record being on an industry label, I have to assume this is the album Miranda Lambert wanted to make.

My first reaction to Four The Record was the same reaction I have to almost all mainstream country albums: What is the point? Why are we putting out new music if all we’re doing is rehashing the same themes and ignoring the album concept? Isn’t there enough music out there already? Four The Record is not a bad album, but it’s really not an album at all, it is just a collection of songs that have little congruency and don’t assert a theme or message. I mean, I guess it does a competent job continuing the Miranda Lambert persona of being a “badass”, but then some songs are meant to show Miranda as fragile and vulnerable. And Miranda’s “music” persona of a crazy girl that lights shit on fire is not in concert with the real-life Miranda who has a perfect celebrity marriage with Blake Shelton.

When people show concern for the death of the album concept at the hands of digital downloaders who cherry pick albums, they seem to think extra packaging and bonus tracks are the antidote. How about going back and listening to all of those classic albums that withstood the test of time? They all said something. Even the title of Four The Record is just a punch line that falls flat. So, without any real way to describe the album on a whole, you must resort to listening to the songs individually, which is a symptom of an album being less than the sum of its parts. 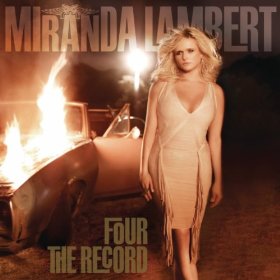 Four The Record has some good songs, a few really good songs, and some ho-hum songs. I wouldn’t say there’s any “bad” songs, but there are some that you just wonder, “what’s the point?” like her duet with Blake Shelton, “Better in the Long Run.” It’s not like it forces your hands over your ears, but I can’t see someone listening to this song with a pensive glance out in to space, and a tear forming in the corner of their eye. You might as well of had 3:34 of dead air.

The one song I’m outright opposed to is the lead single “Baggage Claim.” An easily transparent use of the Beyonce “Get Your Shit And Go” formula, this song proves that parody between super genres does not only materialize in the form of rap. The urban inflections in Miranda’s voice, especially the “…in yo’ name…” line illustrates this song’s want for relevancy, while the bass-driven rhythm seems to almost admit that much of country is too tired for youth appeal, and the parallel between airline baggage and a bad relationship never really sticks.

The songs improve greatly from there. The opening track “All Kinds of Kinds” is one of the standouts on the album, and though this song has been written and re-written many times, it would be unfair to not point out the song’s engaging nature and catchiness. This song, and “Over You” co-written by Blake Shelton, both feature a very 80’s feel, the former from a delayed chorus line that 18 months ago would’ve been as outmoded as parachute pants, but somehow now works, and the latter from a tinkly Sheena Easton-like, almost yacht rock guitar line. “Over You” is a really impressive song, maybe one of the best on the album, building great emphasis and feeling with a rising action in its structure, but it’s solidly pop; no country here whatsoever, which is not necessarily a negativism by itself, but something you don’t expect from someone many are touting as country’s female savior.

“Fastest Girl In Town” and “Mama’s Broken Heart” show that Miranda has not completely buried that bad girl persona that made her first few albums so engaging. Both “Easy Living” and “Oklahoma Sky” are elevated from average to pretty good by smart production. “Oklahoma Sky” is something you could find on Emmylou Harris’s legendary Wrecking Ball album, with its wispy openness and emphasis on soul and expression.

The best song on the album, and it’s not even close, and this song is so good, I dare say it may be the best song I have heard on a major Nashville label release in years is “Fine Tune”. It is common of Music Row releases these days to have a quirky, silly, “change of pace” song that isn’t necessarily meant to work, but meant to lighten the mood and add some spice, though most of the time they just come across as curious and forgettable. I dare say this song turned out so good, even though it is completely unconventional and does not fit Miranda’s style at all, they put it in the choice #2 slot in the track list, a spot usually reserved for what you think is the truly best track on the album.

Singing through a telephone mic with a neo-traditionalist, loungy style, Miranda murders this song like nobody else could. Miranda has an excellent voice, though this album and the songs chosen don’t really emphasize that in most place. Her voice’s best asset is its cuteness. This is what made “The House That Built Me” such a hit. The only song on this album that brings that out is “Fine Tune.” Two guns way up on that song.

In the end, I’m not sure how to rate this album. If I rate it amongst all country music, it is probably average. If I rate it against its peers on Music Row, it may be one of the better albums in years. What I do know is I wouldn’t blame some for cherry picking “Fine Tune,” “All Kinds of Kinds”, and maybe a few other songs and moving on. Here at her fourth album, I feel if Miranda was going to save country music, it probably would have happened by now. At the same time, without question she’s on of the good guys, and an artist independent fans shouldn’t just dismiss out of pocket.