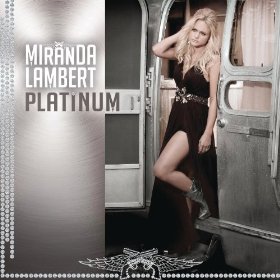 As sad as it is to turn on the radio and hear what country music has become, it is even more sad to zoom out in your mind to a broader perspective and understand that what we’re hearing in mainstream country now is what will define country music for a generation: laundry list songs perpetrated by pretty boy entertainers, pock marked by rap phrases and EDM elements. Right next to the post-war rise of the Grand Ole Opry and Hank Williams, the bluegrass age, Countrypolitan, the Outlaw era, and the Class of ’89 will be this most unfortunate epoch of country music’s storied history that will have to be explained to future generations as either a dark age, or where the story of true country music ends.

The exception though, the counterpoint will be the females of the genre that did their best to offer an alternative, and leading them all in prominence is The Pink Pistol, Miranda Lambert. With four consecutive CMA’s for Female Vocalist under her belt and counting, she is the feminine face of country music for this current era. Few have been able to nip at the heels of the bros on the charts and in tour stats like Miranda, save for Taylor Swift who has become a consensus for the generation’s crossover success instead of a true, country-centric entertainer.

Miranda Lambert’s career arc up to this point sketched out a gradual softening of her edgy, “light shit on fire in scorn” style that won her praise for her candidness, strength, and countrified nature earlier in her career. This trend tends to be the destiny of most any artist if they want to continue to ascend the country ladder instead of stall, and by Miranda’s last album, the aptly-titled Four The Record, she had all but abandoned much of the rough-hewn style that was her original signature. Her new record Platinum, though maybe not violent or vengeful, certainly is edgy, and may not be ill-equipped to carry the marker of being called a retrenching of her early style, at least in ardent nature of some of the subject matter.

It seems when modern country artists attain the highest reaches of the genre, albums tend to not carry any underlying themes, but are simply aggregation points of singles and album cuts. And since “synergies” must be optimized for releasing singles and for tour considerations, the track lists are stretched out to 16 or so songs to compensate for the multi-year gaps in releases. This makes commenting on the albums as a whole as if they are an attempt to summarize an artist’s life or their current creative expression in a given period, instead of just a collection of songs meant to fulfill expectations of targeted demographics, a little bit silly.

On cue, Platinum really doesn’t have any root or theme. You may hope for one, or think that the one word title might allude to delving into some exploration of the human condition, sort of like what Taylor Swift did with Red—using the color as a jumping off point to expound on the virility of human emotion. Instead Miranda’s “Platinum” title track is simply about the hue of a hairstyle, and the color she hopes this album achieves from the RIAA—superfluous, materialistic, shallow things that don’t really hold any deeper meaning. Unfortunately, there’s no “Over You”.

Along with blond hair, which is referenced on this album numerous times, alcohol is mentioned in most of the tracks, including what may look like the title of a gospel-inspired song, “Another Sunday In The South”. Even before this album was released, some wondered how so much salty language ended up on the track list, including “Old Shit” and “Gravity Is A Bitch”, which for all intents and purposes, constitute two of the four “traditional” country tracks the project boasts. Yeah, doubtful you’ll be sending either of these to the old folks back home for their listening pleasure. The 3rd traditional country track, the Western Swing tune “All That’s Left” recorded with The Time Jumpers, is done so straight-laced, you might as well be listening to Asleep At The Wheel. But it is thrown into the middle of the track list almost like a token gesture to the red meat country crowd, like a penance for the album’s ill language and some of its sonic misdeeds.

Though you may think the song “Smokin’ & Drinkin'” that Miranda performs with Little Big Town would be one of Platinum‘s hellraisers, it actually comes across as the country equivalent of yacht rock, with softened edges and an 80’s adult contemporary string bed. When Miranda’s vocal track starts, bolstered by stacked harmonies from the Little Big Town team indicative of Bee Gee’s-style “How Deep Is Your Love” range proximity, it was a laugh out loud moment for this listener, exacting an animatronic effect upon Miranda’s voice fit for a Tron soundtrack.

“Little Red Wagon” is all attitude and immature histrionics, though I’m sure some females will get a kick out of it. Similar to the Carrie Underwood collaboration “Somethin’ Bad” (read full review), it feels like a feudal attempt to joust with bro-country by bringing the level of discourse down to their banal latitudes.

“Priscilla” finds one of Platinum‘s few personal moments for Miranda, but like “Bathroom Sink” which devolves into Miranda channeling Lita Ford, the song feels more like a vehicle to vent and reference mundane everyday moods and artifacts without any real story or message being conveyed beyond complaint.

“Babies Making Babies” is Miranda’s version of the Kacey Musgraves small town disillusion thread, and though Lambert’s overly-inflected drawl tends to hold this song back, it is deftly written and fairly country, making for one of the album’s better tracks. “Holding Onto You” gives Platinum one of its few understated moments; refreshingly sedated with an inviting, Motown feel, while “Hard Staying Sober” is the album’s “three chords and the truth” moment with bold steel guitar and Miranda’s sweet vocal spot being found where her alluring Southern drawl is present, but not hyped. By the time the song goes double time, you’re checking to see if anyone’s looking and cutting a rug in your living room.

Along with “Hard Staying Sober”, the album’s first single “Automatic” is another rich takeaway (read full review), reminiscent in a more warm and positive way despite the by-gone forlornness of the theme, with the tasteful chords pulling at your emotions.

Platinum commits some sins that are unfortunate, but not at all unexpected from the genre’s top female artist, but then atones for them with other worthy offerings until overall the scales are tipped slightly to the good. You’re never going to get the bold strike, the heavily-thematic sonic or lyrical opus you want from an artist like this, which would be the only way to truly engage the adverse forces in country music and attempt to wrangle control from their grips. So you just hope to get more good than bad, and that is what Platinum delivers.