Neil Young’s Americana, his first album with backing band Crazy Horse in 9 years, embodies the full range of feelings I have about Neil Young in general. You see, I hate Neil Young. Positively can’t stand the dude. At the same time I think he is a mad musical genius that deserves all the rights and privileges the moniker “Music Treasure” can bestow.

Right after Neil Young does something so positively stupid, whether in the music or political realm and I swear off his weird ass for good, Everybody Knows This Is Nowhere or some other Neil masterpiece comes up in the MP3 player’s shuffle feature and I can’t help but admit what a genuine bad ass he is. And then he’ll speak out about something important, like the aforementioned MP3 format and how it’s a reduction of the audio experience and there I am, pumping my fists, “Hells yeah Neil, you tell ’em!”

If you haven’t heard, Americana is Neil Young’s take on some very very old, and very standard folk songs from throughout American culture; songs like “Oh, Susanna,” “Clementine, ” and “This Land Is Your Land.” The idea looked so outlandish when first leaked, comparisons were immediately drawn to a Saturday Night Live skit. By the release, the album had already been relegated to an office water cooler popular culture punchline by many. And then Neil goes and names it Americana, igniting the oh so tired, endless back and forth debate about, “Gee, what is Americana truly?” Yeah, let’s just blow our tempers and waste 3 perfectly good hours arguing sonic subtleties yet again until we’ve embarrassed ourselves and run everyone away from the genre.

But let’s just hold our horses a little bit with the snap judgements. Hasn’t Neil Young tacked enough skins on the wall to at least give his offerings a fair listen? 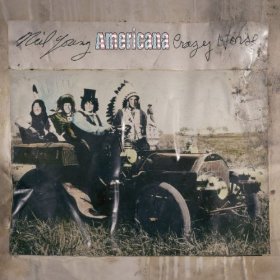 This is the deal with Americana. If someone at random had walked up to Neil with these 11 songs and said, “Do your worst Neil, make these bad ass.” If that was his mission, then he accomplished it, and outstandingly so. The problem is, nobody would ever do that. What would be the point? Aren’t there enough versions of these songs? Is there some poignant message pertaining to present day life that we can squeeze out of these very old, tired saws? In the end yes, Neil Young accomplished the goal. But to what end is not really determined.

But listen to me, you’re cheating yourself if you write off this album completely. Like every album, there’s good, and there’s bad. With the first two songs “Oh, Susanna” and “Clementine,” basically taking nursery rhymes and giving them the dirty, nasty, sweaty, over-driven fuzz guitar treatment of Crazy Horse, it works, and works marvelously while the idea behind Americana is still fresh to your ears. You have to consciously stop and remove yourself from the groove to realize you’re listening to a song you were probably tired of right after you grew out of pajamas with feet. By God Neil Young and Crazy Horse pull the bit off.

But it’s not without its warts. Like the song ‘Get a Job.” This doo-wop era piece is the boat anchor of the Americana idea. What’s that kids game? Which one of these things is not like the other? Is this an “American folk” song? Is he trying to make some sort of proletariat statement here? If he did, it comes across as a goof, and it speed bump’s Americana‘s groove, feel, and approach.

At times there’s also these secondary and third-tier vocal lines that get in the way of the rawness the project attempts to capture. Some of them are chants by Crazy Horse that work for intervals, and other times just become droning by the end of an 8-minute jam. And then there’s occasional female chorus lines dubbed in that distract from the grunt music mood. You can’t fault Crazy Horse for how sloppy these songs are. That’s what you must embrace. Random speedups and missed notes are to be expected, if not endeared to.

Go ahead and write this album off if you want. I’m not sure I could muster the strength to argue the point out too long. But I think when taking some of the songs individually, there is some substance here. I’m afraid this album will not reach the heights of Neil Young’s initial vision, but I’m going to eek out a positive review here based on the strength of some songs, and the balls Neil Young had to try and do something different.

This will be a polarizing album. Break through the rhetoric and make your own decisions. Mine is…

There is an accompanying movie with Americana as well which the videos are culled from.