Strap yourself in, buckle up, and mentally prepare yourself as best you can, because there isn’t anywhere Robyn Ludwick won’t go on This Tall To Ride. Unabashedly exploring the dark underbelly of life where cocaine and sex are the ruling currency, and creatures of the night cuddle up with each other for comfort while attempting to coax upstanding citizens to explore their vices in the gutters of life, This Tall To Ride is like a docudrama looking into American addiction and debauchery, yet told in poetic pentameter.

Before Robyn Ludwick and her songs began to appear in her own projects and the projects of others, she was already a part of what many regard as the one of the first families of Texas country music. The sister of brothers Bruce Robison and Charlie Robison, Ludwick has the pedigree if nothing else. But what she also has is a fearlessness to delve head first into adult themes that short of Tom Waits in the Heartattack & Vine era, few have ever illustrated the courage to lean into with such conviction in roots music. And we’re not talking punk country stuff. Ludwick is probably more accurate to categorize as rock and roll. Yet her lane is Texas, and country, and that makes her music unique, refreshing, and bold in its space.

There’s a saying, “Dance like nobody’s watching.” Robyn Ludwick writes like nobody will listen and judge her personally. Let’s hope she never has to stand before a judge and explain why so many of her songs reference cocaine and sex via solicitation. She takes a devil may care attitude about it all, because these are the textures and hues she feels are her best medium. And she wouldn’t be wrong in that assessment listening to the results. Whether it’s the escapism, the intrigue, or perhaps the ability to relate to the material for some, Robyn Ludwick’s songs command your rapt attention, and repeated spins. 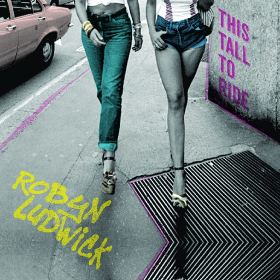 Ludwick first won this particular listener’s attention not through one of her own records, but when two of her songs appeared on her brother Charlie Robison’s last album High Life. Rarely does a single songwriter make such a lasting impression solely through two songs from another performer, but this was the case with “Out Of These Blues” and “Monte Carlo,” the former of which was the title track from Ludwick’s 2011 album. Both these songs dealt with a theme that is recurrent in Robyn’s music, which is the drowning of sorrow in the exploration of sin. Though not an uncommon theme in country or rock by any stretch, Ludwick has weaved her songwriting into a mastery of the subject, even where she can repeatedly address it without wearing it out, or being accused of going to the same well too many times.

Sometimes it’s subtle, like in the words and sighs of one of the album’s standout tracks, “Rock ‘n’ Roll Shoes,” and sometimes it’s right out there in the open like in candid language like the ending track “Texas Jesus.” But don’t accuse Robyn of being a one trick pony. She’s able to also write songs dealing with other subject matter. But when you’re on a roll, and it feels right to write about doing wrong, why not go all in? It also gives a cohesiveness and theme to This Tall to Ride that doesn’t try to hide what it’s all about in the title and cover art.

And yes, let’s just come out and say it: though it’s not always cool to identify artists by their gender as a qualifier, the fact that what occurs in Robyn Ludwick songs is being articulated by a woman gives them an additional layer of badassedry, moxie, and maybe even a little bit of power, though what Ludwick does isn’t necessarily autobiographical. Her specialty is character creation—painting people and putting them in places and situations that we can all identify with as a narrative on the lost side of life.

It probably doesn’t need to be iterated, but of course this type of roguish material will not be for everyone. But Robyn Ludwick and This Tall To Ride is surprisingly accessible, aided by her producer John Ludwick. Her sense of melody and composition allow the songs to be appealing on their own beyond the lyrical content, and the music has an attitude that’s infectious.

Robyn Ludwick makes the losing side of life feel glamorous, until it all comes falling apart. It’s a fun ride though, and luckily Luwick is willing to take us there in mind and spirit so we don’t have to endure the roller coaster ourselves.

Purchase This Tall To Ride from Robyn Ludwick

Purchase This Tall To Ride from Amazon