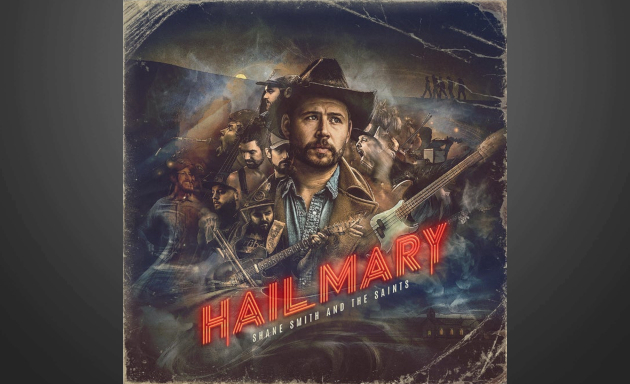 Like tempest tossed seafarers, aspiring musicians spirit out across the fruited plain in their Sprinters and Econolines, crisscrossing the nation and world seeking fortune in what can often be the scandalous business of music, leaving loved ones and familiar environs behind, commonly finding their course fraught with pitfalls and peril, sometimes finding the fame which they seek, but often sailing around in circles, bunked down at Best Westerns on the bad side of town just hoping their merch trailer doesn’t get stolen overnight, with fitful sleep disturbed by second guesses testing the meddle of their musical dreams.

Shane Smith and the Saints are no newcomers to the music scene. But three albums into their journey, they have decided to launch their most ambitious project yet, putting their souls into this the effort with full sails and no second guessing behind a make or break attitude. Just like the title of their last album Geronimo, the name of the new album Hail Mary conveys multiple connotations, from the absolution of sins through persistence, to putting all of your strength behind an effort and hoping that God smiles upon you regardless of the incredible odds. Perhaps though, maybe it’s just about a woman. You’ll have to listen yourself and settle upon your own conclusions.

Some, perhaps many see Shane Smith and the Saints as a logical solution to the void left by the Turnpike Troubadours when they announced their recent hiatus. Since both are members of the Texas and Red Dirt scene, it’s easy to see why some would draw such comparisons. But this is to misunderstand both bands. The Turnpike Troubadours were the boys next door, grounded and earthy in their music, even if the poetry they sowed could sometimes lean towards the inspirational.

But Shane Smith and the Saints aren’t down home country or Southern rock really at all. They take an entirely different approach to roots music, specializing in making moments that soar upon the pulsating rhythms and four-part harmonies of something much more akin to a Gothic form of folk rock as opposed to Oklahoma Red Dirt. The Gods are at play in this music, looking to inspire a soaring of the spirit, and a swooning of the heart as Shane Smith taps into archaic chords that trace back to early Appalachia and even Gaelic traditions. This band doesn’t need to appropriate or piggy back off the legacy of anyone. Shane Smith and the Saints are out there forging their own path, and doing it in a way that is certainly unique to the Texas and Red Dirt realm, even if it’s not entirely unfamiliar to music overall. Though the name is a dirty word in some circles, Mumford & Sons is probably a more apt comparison to what this outfit does, even if Shane Smith’s version is a lot more involved and complex instead of trendy.

Originally from just east of Dallas and now residing in Austin, Shane Smith and the Saints may not be country, but they still have plenty of roots in their music, with many songs and moments leaning on the often barefoot and shirtless Bennett Brown sawing out fiddle solos that can shift from sounding like a Southern jig to an orchestral movement—whatever the mood happens to call for in a song. Shane Smith himself possesses one of those haunting voices that seems to have centuries of history behind it when he sings, second to only Colter Wall in how he can render goosebumps when the right moment is struck. Altogether, Shane Smith and the Saints know how to envelop you in immersive moments like waves crashing down over your head, allowing Hail Mary to take the listener on a conceptualized journey via its eleven offerings divided into four chapters.

Like the landscapes and experiences one may encounter on a lengthy journey, Hail Mary guides the audience through a wide range of moods and moments, from fears to euphoria, with Shane Smith composing involved stories and lessons in songs that are made to feel even more monumental by the earnestness of the music. Understand this album is made to be considered as a whole, and is emboldened when heard consecutively, taking you to a different time and place than the one you reside in while listening. Though it unfurls like a travelogue, love and the mastery of it is what’s at the heart of Hail Mary.

One issue with the album is how the electric guitar sometimes comes across as out-of-place in the otherwise rootsy and arcane temperament of the music. Though the parts and playing are otherwise without issue, it’s fair to ask if its rock ‘n’ roll attitude is appropriate. A Shane Smith and the Saints song is meant to inspire, like beholding the impressive masterwork of some grand Renaissance structure. The guitar work sometimes dispels this majesty with its modern edge. As a footnote, Hail Mary was recorded over a year ago when guitarist Tim Allen was still with the band. Now Dustin Schaefer—previously of The Black Lilies and who filled in with Reckless Kelly recently—has taken that spot. Live, the electric guitar tends to feel more blended than it does on this album.

Bringing an energy and attitude to old style string music and allowing it to burst forth with a freshness and vibrancy is at the heart of what makes Shane Smith and the Saints sound downright magical when they take the stage. Capturing that energy in the studio, and conceptualizing it to a point where the experience is even more hypnotic is what they accomplish on Hail Mary. Seas will remain stormy, as they are for every outfit that takes the independent approach to music. But this conceptualized and inspired work by Shane Smith and the Saints feels like it should mark the moment when obscurity falls to wide acceptance, and this band finds a sustainable home in music all their own.