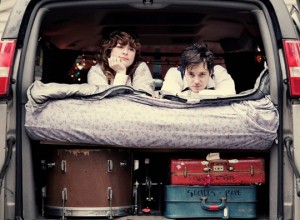 The chemistry of Shovels & Rope is what makes them shine. The sincerity of the music, and their ability to seamlessly blend vocals allows them to ascend beyond their otherwise humble setup and skill sets. Cary Ann even says it in the opening track “Birmingham” which also acts as their de facto introduction and theme song: “Played Springwater, Station Inn. Couldn’t play fast, couldn’t fit in.” What she can do though is sing in high register with that Loretta coal-grit in the back of her throat and awaken something deep and familiar in the music, especially when Michael Trent joins in on harmony.

Shovels & Rope is at their best when they’re autobiographical, or seemingly so, like in the song “Birmingham” and the second track “Keeper” about how the world turns against you, and you against the world when you think you’ve found that one. With Shovels & Rope’s gypsy lifestyle, cuddling in the back of a tour van every night, their songs just seem like a natural extension of their everyday life set to music. This is how the pair’s chemistry draws you in so deep. 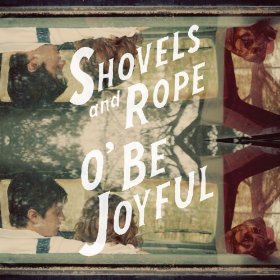 Probably no surprise for you folks that my favorite track on the album is also the most country, the knee-slapping “Kemba”. O’ Be Joyful is just as much country as it is folk, rock, and blues, but one thing I was a little surprised about, especially with the hype surrounding this album was how straightforward and somewhat predictable the music was. The songs are all catchy and engaging, but it’s mostly just riffs, many times relying on simple dynamics and chords instead of instrumentation, arrangement, or composition to make the song compelling. Maybe with the emphasis on vocals and lyrics, adept composition would have gotten in the way. On the flip side, the simplicity and dynamics allow the music to be accessible and extra engaging live. It’s always good when an album sounds live, and makes you want to experience the content in a live format.

Another issue is this fog the music feels like it is set in. It’s really hip right now to use very dirty, primitive recording techniques and dimension in the music to give things a vintage feel, but here instead of setting things front and back in the recording, everything seems set back and a little too muddy to where it goes from giving you that “antiqued” texture to just being somewhat frustrating to the ear.

In this post-White Stripes world (if that is such a thing), these duo tandems are really hot. Shovels and Rope and O’ Be Joyful separate themselves from the herd by being so reckless and unhinged about the whole business, by being so madly eaten up with true love and friendship, and by having so much fun while doing it.

Purchase O’ Be Joyful from Shovels and Rope