If you’re looking for a little levity amid a world gone mad, and music served with a surprising bit of twang, the latest release from long-standing alt-country stalwarts The Bottle Rockets will do you good. Called Bit Logic and brought to you by the fine folks at Bloodshot Records, they put the “country” in front of the “alt” on this one, and make a superb entry point for new country fans, or an opportunity to reconnect with the band for those who’ve gone from smoking grass behind clubs in Gen X attire when The Bottle Rockets were hot, to raising babies and banging out mortgage payments (and still maybe smoking grass when they’re cool enough to know where to find it).

The Bottle Rockets deserve equal billing right beside bands like Uncle Tupelo and the Old 97’s for helping to form the rock side of alt-country in the early 90’s, even if they never found the same level of consistency and fame. That’s partly the blame of bad record deals, including when Atlantic bungled their career, resulting in long delays between Bottle Rockets releases, and other hiccups that had them fighting to stay alive as opposed to building an empire like their alt-country compadres.

But hardcore fans of The Bottle Rockets fought through it all with them, and the band is still around and grinding away at it. Calling Missouri home, what made The Bottle Rockets distinct early on was their folk style of songwriting, with everyman lyrics set to pretty serious rock instrumentation at times, and serving it all with a Heartland vibe. Front man Brian Henneman in his hat and shades was the perfect semi-star for the alt-country movement. It was a blue collar operation that was easy to get behind. 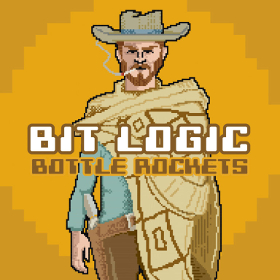 Only fitting after having to fight with their labels for many years that the band would decide to put out an Outlaw-style country record. Don’t expect the second coming of Waylon here mind you, but the twang and grit they bring to some of the new album’s dozens songs is what makes Bit Logic a bit unique in their discography.

The opening, title track with its twangy phase guitar and pounding bass drum immediately get your Outlaw juices flowing. Other songs like the return-to-earth “Knotty Pine,” and an ode to a legendary honky tonk just west of St. Louis called “Stovall’s Grove” are more traditional country in style. But the centerpiece of the record is the hilarious “Bad Time To Be An Outlaw.”

As has been well-documented, often the bluster and machismo of modern “Outlaws” can be a bit too much to handle. In “Bad Time To Be An Outlaw,” The Bottle Rockets take a more lighthearted, self-deprecating approach. The antihero song includes such diamond lines as “My music’s good, but my income sucks,” and professes jealousy of some of today’s country stars instead of anger. “Carrie Underwood doesn’t make country sound, but she can afford when shit breaks down.” It’s a new spin on the tired old country protest song.

With a name like Bit Logic, country may not be what you expect, but the record does have a secondary theme of tackling the challenge of the arcane man bumbling through the modern world a bit intimidated as everything goes whizzing by. It’s always been The Bottle Rockets’ simple, relatable, yet witty lyrics that have made them easy to warm up to, and a quarter century of filling up sheets of paper with songs ideas haven’t tapped that well dry just yet.

Bit Logic also includes a few songs that feel more consistent with the alternative/garage rock history of the band, so don’t go expecting a shit kicker here. The Bottle Rockets are for the underdogs, and continue that theme in this new record, perhaps most sweetly stated in the final song “Silver Ring” about not being able to afford a gold one, but hoping the sentiment behind it is still as meaningful.

Bit Logic is a fun, entertaining listen, giving your ears and mind a deep breath from this otherwise raucous moment in history, while still serving a few important points of wisdom and an enlightening perspective.