Album Review – The SteelDrivers “Bad For You”

The challenge for every modern bluegrass band or musician that doesn’t count themselves in the company of the strict preservationists is to uphold the bluegrass requirements that are considered some of the most rigid in all of country and roots, while still doing something that compels the modern ear, and adds something meaningful to the canon of recorded music. For the SteelDrivers, the way they accomplish this is by bringing in the influences of other roots genres to bluegrass instrumentation, namely the soulful, gut-punching, testifying warbles and moans of the blues and vintage R&B that imbibe their music with a measure of blood and color that other bluegrass music just doesn’t provide.

If you’re looking for superpicking and wild runs on wood and wire that wow you with instrumental prowess, The SteelDrivers are not exactly where you turn. That’s not to say they can’t excel in this realm as well, as they prove on the instrumental of this new record, “Mama Says No.” But they separate themselves from the herd of buttoned up bluegrass pickers and jam band newgrassers by bringing that across-the-tracks influence to the long-established bluegrass medium, and then excelling at it.

Taking the ancient appeal of both bluegrass and the blues, and adding a bit of attitude that’s probably more akin to Southern rock, The SteelDrivers fill a void in music we never knew existed before, but that would now feel gaping if it was ever vacated. That’s why many SteelDrivers fans winced when they heard that Chris Stapleton was leaving the band that he helped put on the map. But they weathered that storm, and added to their legacy when Gary Nichols filled in admirably for Stapleton, and brought a new dimension to the group. Then when Nichols departed in 2017, many wondered what was next, even if the nucleus of the band could remain in tact. 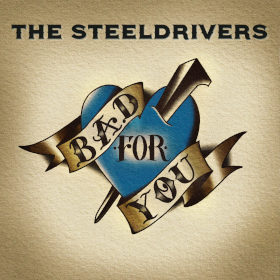 But like many long-standing bluegrass bands that have at times featured a revolving cast, The SteelDrivers are quickly graduating to being considered more of an institution than a simple bluegrass group, helped along with their four Grammy nominations and one win. Besides, fiddler and songwriter Tammy Rodgers, bassist Mike Fleming, and banjoist Richard Bailey have always been the heart of the outfit.

Who knew that The SteelDrivers could not only weather the loss of two high-profile frontman, but still somehow feel like they’ve experienced an upgrade. This is the case with the addition of Kelvin Damrell to the group—a somewhat random dude accidentally discovered on YouTube who with all due respect to Chris Stapleton and Gary Nichols, sounds like he was put on earth to front the SteelDrivers more than anyone.

Soul drips from every note Kelvin Damrell sings, and he fits expertly with the bluesy approach The SteelDrivers bring to bluegrass, the songwriting of the band, and their new record Bad For You specifically. Right out of the chute with the title track, this is music that tears at your heart and holds its emotions heavy. Poor decisions and regret define this record, from the warnings embedded in “Bad For You,” to the plausible deniability in “The Bartender,” to a professed killer knowing he’ll get away with his crime but will never be able to clear his conscience in “Innocent Man.” And you don’t just hear these cautionary tales, you feel them in your marrow thanks to the mood The SteelDrivers set that hangs like a foreboding brood over a wanted man’s head.

The SteelDrivers are considered just as much a songwriting collective as they are a performance syndicate and proving ground for lead singers. At no point does Bad For You feel light in its writing or less than stellar, while some may gravitate to this as the greatest attribute to the project. But it does bear mentioning that most of the songs on this new record stick close to familiar themes and modes to blues, R&B, and bluegrass, even though they do these themes better than most. The lyrics of the SteelDrivers fit the mood of the music just about perfectly, with little or no latency between the two you sometimes get in pure songwriting efforts with no purposeful musical direction like The SteelDrivers boast.

With a reverence and aptitude at reviving multiple cherished roots disciplines within their sphere of the bluegrass realm, and with a new lead singer that can supercharge songs that already hold a cherished place in the minds of established fans, the SteelDrivers aren’t just weathering storms, they’re taming the sea, and possibly just now hitting their stride with Bad For You.

Purchase Bad For You from the SteelDrivers

Purchase Bad For You from Amazon