Just as the current generation of true country fans looks back with envy at the era when artists like Willie, Waylon, Haggard and Jones were in their heyday, and fans of the 70’s reminisced back on the time when the likes of Hank Williams, Lefty Frizzell, and Patsy Cline reigned supreme, so will future generations reflect back on the present day when a group of independent performers rallied together to mark an incredible year for country music, and Cody Jinks didn’t just release one career-level record, he released two of them in successive weeks that went on to challenge for #1 in the charts. And Jinks did it not as an independently-signed artist, but as an artist not signed to a record label at all.

During an era when we search for heroes and better alternatives, but the letdown and heartbreak you often feel as a true country music fan seems to linger around every corner, Cody Jinks has risen to become the artist who uncompromisingly delivers on the promises of his potential. In a period when it seems like performers are looking to make excuses of why they no longer want to be considered country, Cody holds firm to his roots, and disproves the notions you can’t be creative within country’s confines. And all of this praise is not due to Cody Jinks being perfect. It’s because he’s imperfect and flawed just like the rest of us, and is willing to unburden and expose these truths through his songs in a way that is relatable and resonant with his loyal audience.

Go ahead and file away your worries that Cody Jinks bit off more than he could chew by choosing to release two full records in a row, and right after releasing an album the previous year and keeping a full tour schedule. If you were one of those that believed his 2018 record Lifers was less than stellar and that the best of Cody Jinks was already etched in vinyl, don’t be afraid to admit the failing of your assessment. With these two records, Cody Jinks has hushed his doubters, and proven that his greatest era is now, and ongoing.

Both After The Fire released on October 11th, 2019, and this new title The Wanting should be regarded together as companion releases, but they both include different approaches. It’s fair to say the songwriting in After The Fire edges out that of The Wanting slightly, and that The Wanting includes some of the energy and variety that After The Fire lacked. But these aren’t criticisms as much as observations, and the two albums considered together equal something greater than the sum of their parts. 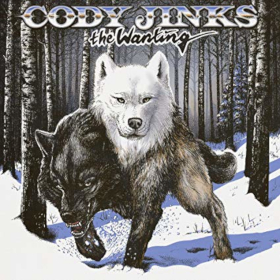 Once again the overarching theme of The Wanting is Cody’s personal struggles with inner demons and the rigors of stardom. Isn’t it refreshing when so much of modern country involves braggadocios self-aggrandization that Cody Jinks is willing to speak unflinchingly about his fears and vulnerabilities. But The Wanting is different from After The Fire in how it doesn’t just deal with regret. It broaches the dichotomy wrapped within the human spirit that gives rise to regret in songs like “The Raven and the Dove” and “Which One I Feed,” which inspires the inspiration of the cover art of a two-headed wolf.

Not having to rely so much on the sometimes constricting nature of earnest songwriting allows an elevated emphasis on music and melody on The Wanting. Cody’s able to explore a greater range with his vocals, and the players can stretch their legs a bit without running the risk of interrupting important moments. A chorus of “ooh ooh’s” is administered to the album’s title track and may be received strangely by some at first, but they fit well with the overall mood of the record. A similar “ooh ooh” chorus emerges on “Which One I Feed” with greater effectiveness.

Let’s not imply that The Wanting is deficient in the songwriting department; quite the contrary. Though Cody Jinks once again calls on a quality team of songwriters to accompany him on The Wanting—including Tennessee Jet, Ward Davis, Josh Morningstar, Casper McWade, Jaida Dreyer, and others—like on After The Fire, Cody Jinks paired with wife Rebecca results in arguably the album’s best track in “Never Alone Always Lonely.” Most all of the album’s efforts are above average, even if they can’t attain the incredibly high bar set by After The Fire. “Wounded Mind” is another standout, though you do wonder if some will start to become wary of all the songs about struggling with stardom and tour life after two records of this stuff.

The Wanting provides some of the music vitality that was the only concern to draw from After The Fire, and it also might provide a better entry point into both records, and Cody’s discography in total. It accomplishes what Lifers looked to do, which is what Cody does best—provide those fist-pumping and viscerally-pleasing songs, but ones that don’t skimp on substance. Cody Jinks country is the best of both worlds, carrying all the twang and grit you’d ever want, but with the singer/songwriter sentiments that challenge the best poets from country to Americana.

With The Wanting and After The Fire, Cody Jinks, his songwriting collaborators, and his musical accomplices in the Tonedeaf Hippies do what is very difficult in this crowded day and age of music, which is deliver a double dose of something that keeps you interested and engaged throughout, while also helping to define this era’s top offerings from artists who don’t believe country music is a limiting creative experience, but that it’s a timeless art form for sharing joys, drowning sorrows, and conveying troubles with others for collective commiseration and understanding. True country music is there for you, always, and so is the music of Cody Jinks.

Purchase The Wanting from Cody Jinks

Purchase The Wanting from Amazon