One way to describe William Elliott Whitmore’s music is to say that he has the soul of an old black woman. I know that analogy may not make sense to anyone but me, but it makes such perfect sense to me, I’m going to roll with it.

As the name implies, Field Songs evokes the rhythms and weary textures of labor. Instead of trying to charm you with witty one-liners like most engaged in singer/songwriter craft, William instead uses lyric to set a groove, like a good, slow blues song. He trances you into feeling the theme of the music by employing the chants, the rhythms men have hummed as they toiled away since the invention of work to ease the burden and boredom. That rhythm is what ties this album to an inherent, universal language of the human condition and prickles the soul. 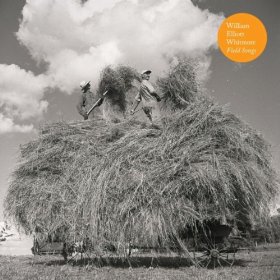 Adding ambient nature sounds and lots of space between tracks is Whitmore’s way of encouraging the work to be taken in one breath instead of cherry picking tracks. This isn’t an album to blare when you’re pissed off at your boss, this is for when you’re weary and sore and want to relax and appreciate the fulfillment of toil, or when you need an uplift of the spirit, because despite Whitmore’s uncannily-aged, almost hoary voice and the droning nature of the songs, there is a lot of positivity here, similar to how the field songs of generations past were intended to uplift the spirit despite the sometimes desperate conditions that inspired the tunes.

My concern about this album is that it may not be the best way to represent what Whitmore does to people for the first time. Taken in the context of his live show and his previous works, it fits like a glove, but there is so much dead space on this album, many minutes of just strumming open chords, and with it’s inability to convey the energy of what Whitmore does live, I’m worried some will find it boring, and for justifiable reasons. Unlike other sparse, acoustic-based albums, like Gillian Welch’s recent The Harrow & The Harvest for example, there isn’t those heavy lines of lyric that help create body in a song when there’s a lack of instrumentation.

However Whitmore’s work is also aided by authenticity. Hailing from an Iowa horse farm on the banks of the Mississippi, William has no doubt experienced the inspiration for Field Songs first hand. The album also carries a universal theme, which always makes an album greater than the sum of its parts.

I would say this album is not for everyone, but one of the curiosities about Whitmore’s decade-plus run with music is the diversity of the following he’s garnered, ranging from punk kids, to the most exclusive of the NPR crowd that only consume the finest of wines. Field Songs may not be Whitmore’s best year, but it is certainly worth a tasting.