When an artist rises to such other-worldly status as the one Willie Nelson enjoys, you’re never really sure when listening to a new album if there’s actually some real substance behind the new music, or if you’re simply so wooed by the legacy and mere sound of the man’s voice that he could sing a shopping list and you’d love it.

America experienced this sensation first hand during the Super Bowl this year when Willie’s signature warble showed up in a random Chipotle commercial. It was Coldplay’s song “The Scientist” Willie was singing? Who cares, it was Willie, and we get to relive that moment when that same song caps off his latest record, Heroes.

Popular media has been portraying Heroes as Willie’s pot opus. He initially wanted to call the album “Roll Me Up and Smoke Me When I Die” for the album’s second track featuring Snoop Dogg among other guests. I’ve said my peace about how I hope Willie Nelson’s legacy is remembered for more than marijuana, but as a song, the “Roll Me Up” title track runner-up is a really fun, witty vintage Willie song. But let’s not bury the lead here about the best thing Heroes has to offer, which is a full scale collaboration between Willie and his singularly-talented son Lukas Nelson, who appears so much on this album, he really should get his name in small type somewhere on the front cover.

As I said in my review of Lukas’s latest album, he is the offspring most rich with Willie blood, with top-shelf guitar playing abilities all his own to boot. If you want to know what a rock & roll version of Willie would be, look to Lukas. Close your eyes when Lukas is singing, and you can almost see Willie, with Lukas’s natural, high-register tone, and perfect pitch and control that doesn’t ape Willie, but evokes his memory. You put these two men together in a song, and it’s a country music audiophile’s orgasm. It is a super-pairing employing skill, legacy, and a cross-generational storyline into a sublime musical experience. 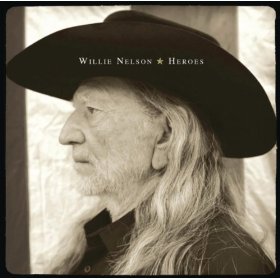 But the Willie/Lukas collaboration is not by far where Heroes stops giving. From a songwriting perspective, this album has some amazing compositions, from the eloquent to the witty, from writers as far ranging as Eddie Vedder, Fred Rose and Bob Wills, to Tom Waits. Once again Lukas shows up prominently in the songwriter notes, contributing three songs himself.

Some have said this album lacks focus. I say it scores points for variety and freshness. From the heart-wrenching songs of love sung by the Lukas/Willie pairing like “The Sound of Your Memory” to the fun, yet poignant and uplifting “Come On Back Jesus (and pick up John Wayne on the way)”, the album touches on all the moods you want to hear from Willie. I’m so glad they decided to roll with with the Heroes title for this release; a much more classy choice that gives an extra shout out to Billy Joe Shaver in the only song Willie wrote by himself on the album.

Where the album may come across as too busy or unfocused is the amount of contributors to each composition, and to the album as a whole. Lukas, Jamey Johnson a couple of times, Kris Kristofferson, Snoop Dogg, Merle Haggard, Ray Price, Billy Joe Shaver, Willie’s other son Micah, the omnipresent and overexposed Sheryl Crow, they all appear, and this doesn’t even mention all the musicians. Sure, many of these names we love, but there’s too many of them, diverting focus from any one pairing or performance. At times in this album you want to clear the room and just hear Willie, for the same reasons he can single-handedly make a Coldplay song sound like a masterpiece (the Coldplay song is the only one on the album where Willie rides solo).

It’s Willie’s nature to invite anyone and everyone into the process, and his big heart is one of the reasons why we love him so. But at some point you reach a limit with collaboration, especially since Willie likes to sing in such an unusual, off-tempo pentameter that makes him not the best duet partner, and because this album is in no way presented as a “duets” release. I love the cover of Heroes though. Willie’s inspiring and calming countenance speaks countless words and stories, and the plaintive cover allows his visage to speak for itself without interruption or embellishment. It recollects to the etching on the front of his magnum opus Red Headed Stranger.

This album is good both because it is Willie, and because it is good. After years of navigating through a gray area in his career and having to dabble with some record labels probably less able to do a Willie release justice, he’s back with the same company who released Red Headed Stranger, and back to making albums worthy of the world stopping down to pay attention to.