Andy Vaughan & The Driveline Are ‘Searching for the Song’

One of the banes of the music writer is when you find music you like, but you just don’t know what to say about it. What’s even worse is when people assume that one of the reasons you’ve said nothing about an artist or album is because you don’t like it. Andy Vaughan and The Driveline‘s first album Long Gone was one of those albums: good, but hard to find words for. Seeing them at The White Horse in Austin, TX earlier this year was not much help either. Only with Searching For The Song have I been able to find the words. 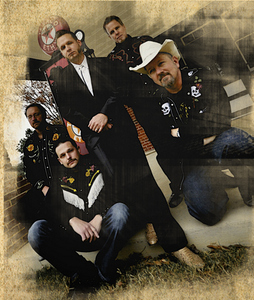 There’s so much music these days vying for everyone’s attention, it is almost imperative that you employ some sort of “bit” to get noticed: a distinctive singing style, a blending of genres, humor, irony, etc. How about just sincerity in craft, and good songwriting? Why can’t that get noticed too? After all, in music these days, that’s pretty rare itself, and those attributes are what Andy Vaughan puts into play in Searching For The Song.

If Andy Vaughn was searching for some great songs for this album, he certainly found them. And if you are searching for great songs, look no further. Take “I Believe In Cowboys” for example, about holding on to the faith and wonder of youth, even as the world pushes its acrimony and bitterness down your throat. The way the song articulates its positivity, and then is structured so perfectly to turn defeatist but doesn’t is a mad stroke of songwriting genius and marvelously-refreshing in such a cynical world. Counterbalancing this is the despondent, but equally-witty song “I Don’t Care”.

Songs like “One More Teardrop”, “Movin’ On”, “Hello Misery”, and “One Good Day” are just good old-fashioned country songs of heartbreak, but this album isn’t all gloom. “Swing That Hammer Down” and “Giggle & A Wiggle” add some lightheartedness and fun to the project, giving Searching For The Song great balance.

And let’s give some props to The Driveline as well, especially steel guitar player Slim Stanton, and Andy’s right hand man and lead guitar player Jerry Renshaw who wrote “Giggle & A Wiggle” and co-wrote “Caught On The Fence” with Andy.

If I had to name a best song, I might go with the aforementioned “I Believe In Cowboys”, or the “Searching For The Song” title track where Andy gets right down to the heart of the matter, and articulates the theme of this album and the underlying issue with artists like him that are struggling in the shadows, chasing a dream that unfortunately is all to unrealistic, yet they can’t stop believing in and pursuing despite knowing better.

The final track “Don’t Tell Me I Ain’t Country” is a good song, it just seemed a little out of Andy’s element (though artists should be afforded a little latitude on a last track). And as much as I want to chagrin music bits, and as much as I like Searching for the Song, I do think that Andy’s music is still “searching” for something that can better help define him and delineate his music from the crowd. But at the same time, that is what’s cool about Searching For The Song, because that is what the theme of this album is about.

With JP Harris, Eric Strickland, and now Andy Vaughan & The Driveline, 2012 has seen a solid crop of no frills, real deal, old school country music albums. If those albums spoke to you, this one will too.

Purchase Searching For The Song from Andy Vaughan

Andy Vaughan and the Driveline, Eric Strickland, JP Harris and the Tough Choices, Searching For The Song