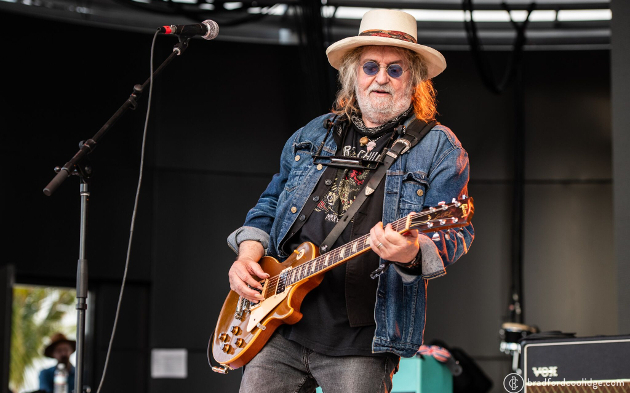 There are few moments that are more significant in the lives and careers of country and roots musicians than making their debut appearance on the Grand Ole Opry. Often it’s artists in their 20s and 30s who are the ones who get that special opportunity, but at 72, and 50-something years deep into the music business, Ray Wylie Hubbard finally got his turn in the Opry circle Wednesday night, July 17th, 2019. It was courtesy of Pam Tillis.

“I want to get this next guest intro right because it’s so important to me,” Pam Tillis said after playing her own set on the famous radio show and stage. “This gentleman I’m about to introduce you to has fans as diverse as Stevie Ray Vaughan, Willie Nelson, Waylon Jennings, Patty Griffin, Ringo Starr, Steve Earle, Lee Ann Womack … so many people know about this man and look up to him as the very epitome of a true artist, a true writer. He has influenced a generation of Texas musicians and songwriters. 55 years making music. Made is debut on David Letterman, and I said, ‘You know, Ray Wylie Hubbard, it is time that you played the Grand Ole Opry.”

Pam Tillis mentioned that Ray Wylie has been working on putting out his 17th record that’s a collaboration with many artists, including Pam herself. The two met in the Nashville airport, and have been writing songs together. “He’s always been an influencer to me,” Tillis said.

“Thank you. Thank you Pam for the nice introduction. I can hardly wait to hear me,” Ray Wylie responded in his signature folksy manner, stepping into the hallowed circle and plucking at the first few notes of his signature song, “Snake Farm.” Joining Ray on the stage was Larkin Poe, and his son Lucas Hubbard among others.

“This is obviously the first time a number of you have appeared before me. I would imagine after that first song, you’re a little nervous,” Hubbard said after “Snake Farm,” and then played “Loose” from his 2010 record A. Enlightenment B. Endarkenment. As always, Ray’s stage banter was just as entertaining as his songs. Hubbard finished up with his song “The Messenger.”