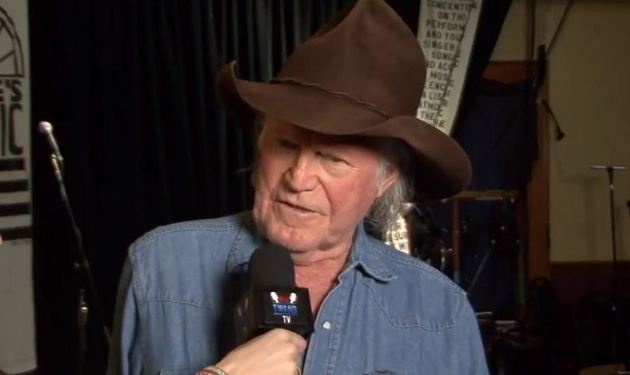 On this day in 1972—give or take a day or two because nobody recalls exactly what day it was specifically—but it was during the 1972 Willie Nelson-helmed Dripping Springs Reunion the 3rd weekend of March that Billy Joe Shaver first met Waylon Jennings. Eventually the chance meeting would lead to Waylon recording an entire album of Billy Joe Shaver songs called Honky Tonk Heroes. But there were quite a few bumps in the road to get there.

“I was at the Dripping Springs Reunion … And I was singing ‘Willy The Wandering Gypsy and Me’,” Billy Joe Shaver explained to All Twang TV before a recent show at Eddie’s Attic in Atlanta (see below). “And Waylon and another fella come out of there. Waylon busted out of there and said, ‘Whose song is that?’ We was passing a guitar around. There was about three of us … And I said, ‘Well it’s mine.’ He says, ‘well I’d like to learn that and record it.’ and I said ‘Okay’ and he sat down there with me and learned it and everything. And he said, ‘You got any more of those cowboy songs?’ And that’s what I was doing at that time, and I said, ‘Yeah I got a sack full of ’em.'”

Shaver had already been in Nashville previously working for Bobby Bare and others, but getting his songs cut by Waylon Jennings was a chance for Shaver’s big break.

“He told me to come up to Nashville and he would record all those songs,” says Shaver. “I took him at his word and I chased him around about six months, and I’m doing little odd jobs, you know. I used to wash dishes and stuff … Finally one night, Captain Midnight whose a friend of mine, a disc jockey there, very popular guy, he managed to get me into a session of Waylon’s, and Waylon didn’t like me because he’d run every time he’d see me. He knew he made me a promise but he didn’t want to keep it. Waylon found out I was there and he sent Midnight back with a $100 bill just folded up into a little bitty square and [Waylon] said, ‘Give this to him and tell him to get lost.’ I looked at that and thought ‘Wow’ because I was broke. I could have used it. But I told him, ‘Here, tell [Waylon] to stick this where the sun don’t shine, and twist it.'”

As you can imagine, Waylon was not too happy.

“He’s mad as hell. And there’s a bunch of hangers on and groupies and people like that all up and down the hall. It was a long hall and it was almost like a gunfight deal. He comes out of there and he’s got two bikers on each side, and he says, ‘Hoss, what do you want?’ And I says, ‘I’ll tell you what I want … If you don’t listen to these songs, at least listen to them, I’m going to whip your ass right here in front of God and everybody.”

The rest is history. Waylon listened to one song, and then another, and then another, and decided to cut a whole album of them. “His songs were of a piece, and the only way you could ever understand Billy Joe was to hear his whole body of work,” Waylon said in his biography. “Billy Joe talked the way a modern cowboy would speak, if he stepped out of the West and lived today.”

Shaver also talked to All Twang TV about how he feels about modern country music. “It’s gotten away from the foundation that it was. We laid down a pretty good foundation for them. Young people are always going to experiment, and they’ve kind of gotten way out on a limb I think.”

The full interview and a live performance can be seen below.