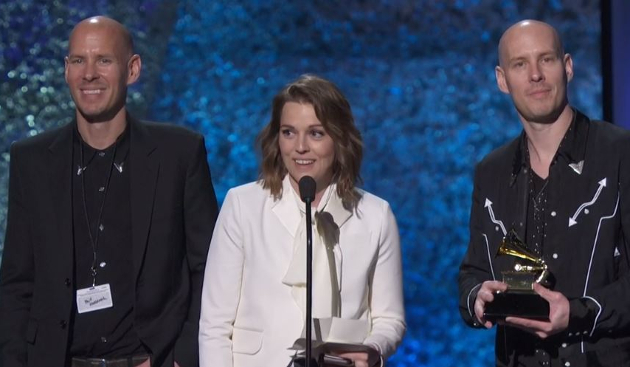 Brandi Carlile is the big winner coming out of the 2019 Grammy Awards Premier Ceremony, where some 70+ awards are handed out ahead of the telecast version of the awards show, including the Americana, bluegrass, folk, and blues awards. Brandi Carlile won Best American Roots Performance for “The Joke,” as well as Best Americana Album for By The Way, I Forgive You. She also won Best American Roots Song, which is a songwriters award she shares with Dave Cobb, Phil Hanseroth and Tim Hanseroth—a.k.a. ‘The Twins” who make up her band. Dave Cobb and Shooter Jennings also share in the accolades as producers of By The Way, I Forgive You.

“I’m going to say something,” Carlile said while accepting her award for Best Americana Album. “I wrote this win or lose. If we didn’t win anything, I was just going to put this in an envelope with a heart on it and give it to [Dave Cobb].”

“Americana music is the island of the misfit toys. I am such a misfit. It is this music that has shaped my life and made me who I am, and even given me my family. I came out of the closet at 15-years-old when I was in high school, and I can assure you I was never invited to any parties. I never got to attend a dance. To be embraced by this loving and enduring community has been the dance of a lifetime. Thank you for being my island.”

Dave Cobb also spoke after Brandi Carlile’s third award. “I’m so proud to be involved, and get to go into the studio with such incredible talent, including the talent that’s out there tonight. Thank you guys for giving us this platform.”

Other winners in the American roots categories included The Travelin’ McCourys for their self-titled album for Best Bluegrass Album, The Punch Brothers and All Ashore for Best Folk Album, Buddy Guy and The Blues Is Alive and Well for Best Traditional Blues Album, and Fantastic Negrito and Please Don’t Be Dead for Best Contemporary Blues Album.