Disregard that discussions about Bro-Country now feel like old hat ever since the trend trailed off except for a few last vestiges of outdated-feeling singles working through the system, Brantley Gilbert has decided he’s fed up with all the fuss about Bro-Country and has released a single saying as much. 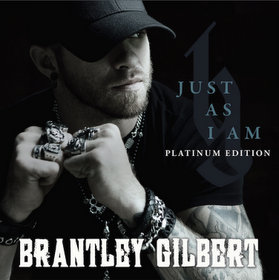 Somewhat quietly, Brantley Gilbert announced that his current album Just As I Am originally released by Big Machine’s Valory Music Group on May 19th of 2014 will get a “Platinum Edition” to mark the one year anniversary of the release. The Platinum Edition will hit shelves May 19th, 2015. It includes eight new songs, including three that appeared on a Wal-Mart exclusive version of the original album, and it also includes a remix with hip-hop artist T.I. of Brantley’s big hit “Bottoms Up.” Also in the track list and released as the first single from the Platinum Edition is “Same Old Song.” It apparently was released on April 28th, but has received very little press or media push.

The song criticizes complaints about Bro-Country by listing off many of the same common tropes of the trend and saying they’re authentic to the lifestyle of the singers. It then evokes “Amazing Grace” as another song people can’t stop singing.

Just as curious as the lack of attention this single has received is the fact that it’s coming from Brantley Gilbert. Though Brantley is considered one of the artists and songwriters that was an early architect of the Bro-Country trend with songs like “Dirt Road Anthem,” his Just As I Am album seemed to distance somewhat from Bro-Country beyond the album’s two big singles.

Whether “Same Old Song” ever makes its way to radio remains to be seen, but Brantley’s attempt to rally support around a quickly depreciating trend may turn out to be fool’s errand.

If you do the Spotify thing you can listen below. Otherwise the lyrics can be found further down.

I hear there’s folks
Tired of us talking about dirt roads
Tailgates, tan lines and corn rows
It sounds made up but that’s the life I know
We know all about some moonshine
Moonlight, bonfires
Seein’ all the stars on a summer night
Don’t see how that’s gettin’ old

You heard enough about red dirt
Blue collar dollars and hard work
5:00 heading to the outskirts
3 chords and the truth
Tired of hearin’ ’bout them tan legs
Bare feet on the dash, sundress
Daisy dukes, boots and ray-bans
You ain’t even seen them move

Sit with us on Sunday mornin’
Bow your head and let us pray
Close your eyes and let the Lord in
Tell me you don’t feel a thing
When we sing Amazing Grace
C’mon, man, sing along
You ’bout to see why we can’t
Quit singin’ that same old