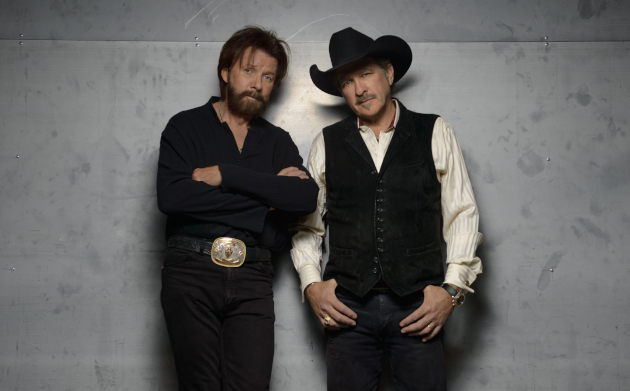 There’s been some shows in Vegas with Reba and random appearances on awards shows and such, but it’s been 10 years since Country Music Hall of Famers Brooks & Dunn hit the road for a proper national tour. That will all change this summer and fall when the duo hits the road on the REBOOT 2020 Tour with 18 dates across the country announced so far.

“The memories of playing live are what have kept the fire burning for us,” says Kix Brooks. “Performers who have had the kind of nights like we’ve had with our fans, can never really let that go. Live is where we’re most at home, and it’s gonna feel good to be back in the saddle, let’s rodeo! We’ll see y’all out there on the trail.”

Despite officially splitting in August of 2009, the duo didn’t fall too far out of the spotlight. Kix became a radio personality, and Ronnie Dunn went head first into a solo career. But with the resurgence of interest in 80’s and 90’s country at the moment, they would be fools not to head out on the road, especially when we’re only talking about a few dates a month.

Who will the opening acts be? According to the duo, there won’t be any. But, there will be “special guests” joining them at each stop. It might be a safe bet to assume some of those guests will be the folks that appeared on the 2019 Brooks & Dunn Reboot record that saw the pair re-recording some of their classic hits. If that’s the case, don’t be surprised if people like Jon Pardi, Cody Johnson, Luke Combs, Ashley McBryde, Kacey Musgraves, or Midland show up.

Along with the Reboot tour dates, Brooks & Dunn will continue their Las Vegas residency at The Colosseum at Caesars Palace throughout 2020, including six appearances in April, June, October, and four appearances in December.