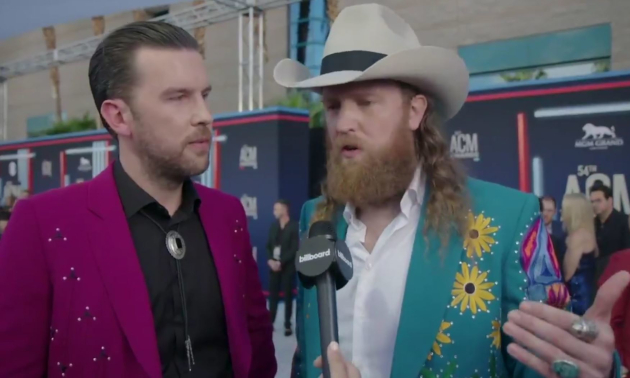 “Something about a horse, boobies and some shit? … Go listen to Kris Kristofferson, and then go listen to that song, and if you tell me they have anything to do with each other, then I will quit.” — John Osborne.

The controversy surrounding Lil Nas X’s exclusion from the Billboard Hot Country Songs chart is just getting started as the media echo chamber has gone into full obsession mode over the issue, and it’s been extended by Billy Ray Cyrus teaming with Lil Nas X on a remix of the song.

So far, just about the only place you can find anyone trying to offer any bit of reasonable and rational context and perspective on the matter among a bevy of outright lies being spread far and wide over the controversy has been Saving Country Music. But on the red carpet of the ACM Awards, Brothers Osborne—who are known for speaking their minds about controversial issues—piped up when asked about the Lil Nas X and “Old Town Road,” and offered the perspective that gone virtually unshared throughout media.

When asked by a Billboard red carpet reporter about “Old Town Road” and what the definition of country music is, lead singer T.J. Osborne responded,

“Certainly not that. You know, I don’t know what country music is, it’s not for me to say. For me, if music makes someone feel good, then that’s really the whole point of it. However, I don’t like that there’s this controversy around [‘Old Town Road’]. John and I, we’ve had success at radio, but we still struggle at radio all the time. So to complain about that to me is just like, ‘Dude, come on. Get in line.'”

“There are tons of girls just waiting for the moment, waiting in line, writing the right songs, showing up everyday to the writing room, sometimes doing two or three or four writes a day. They’ve been in Nashville for over 10 years. There’s a girl in Nashville right now called Hailey Whitters who’s incredible. You go check her music out and you’re like, ‘Come on, we need to get this girl propped up.’ Then this dude puts out a song with kind of quasi country lyrics? Something about a horse, boobies and some shit?”

“Let’s turn the focus away from that,” John Osborne continued. “Don’t create controversy and expect that to give you a hall pass. We need great songs. Go listen to Kris Kristofferson, and then go listen to that song, and if you tell me they have anything to do with each other, then I will quit. I’m out. I’m done with this genre. I’m done.”

The comments from the Osborne Brothers underscore that in the rush to accuse country music and Billboard of racism, the media is completely overlooking the lack of merit “Old Town Road” has as a song itself. As T.J. Osborne said, if people find joy in it, there’s no reason to criticize that specifically. But is this really the song that advocates for diversity and inclusion in country music want representing the contributions of African Americans or hip-hop artists to the genre?

As John Osborne points out, the inclusion of “Old Town Road” comes at the exclusion of dozens of artists who are devoting their lives to the genre and have incredible talent, specifically women who are being ignored in country music, including Hailey Whitters, who just released a stunning song called “10 Year Town.” There are also many African American artists whose efforts are being overshadowed by Lil Nas X and “Old Town Road.”

Brothers Osborne are not dyed-in-the-wool traditional country artists with a conservative bend. Their music is quite progressive for country, as is their politics, and they have previously taken liberal stances on certain social issues that are against the country music norm.

The Lil Nas X controversy was never a racial issue until the media made it one. It was about making sure that artists who show their loyalty to country music see that loyalty reciprocated by attention from the institutions and metrics meant to support those artists, while making sure individuals and entities who actively attempt to manipulate the system aren’t allowed to cut in line.

We spoke to @brothersosborne about their performance with @MarenMorris and define what country music means to them at the #ACMawards. pic.twitter.com/4N4hgI8Wu1