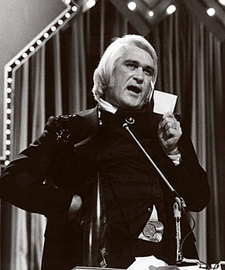 There may not be a more notorious moment in the annals of country music lore than when a drunk and disorderly Charlie Rich set fire to the piece of paper announcing John Denver as the Country Music Association “Entertainer of the Year” for 1975. For years the moment has set the high water mark for the rebuke of the pop world infiltrating country, but we only had our sweet little memories or imaginations to conjure up the actual scene of how the protest took place.

Saving Country Music and many others I’m sure have spent hours trying to procure the actual footage of the Charlie Rich fire trick, with a nervous John Denver looking on via satellite from Australia. I never envisioned that host Glen Campbell would be holding a cigarette while standing at the podium and welcoming Charlie Rich to the stage. Nor did I accurately gauge the degree of Rich’s drunkeness. But fortunately the footage has finally surfaced, and through the miracle of YouTube, we can all re-live this lost moment of country music history again and again.

At the 1974 CMA Awards, a firestorm erupted when Olivia-Newton John was awarded the “Female Vocalist of the Year.” This created a backlash, including many traditional country stars met at the house of George Jones and Tammy Wynette and decided to form “ACE” or the Association of Country Entertainers to attempt to fight the influx of pop stars into the genre. This was the event that set the table for Charlie’s stunt.

As the Country Music Hall of Fame describes the incident:

“As a result of that 1974 flap, a memorable CMA Awards event came the next year, when an obviously well-lubricated Charlie Rich ended his reign as 1974’s Entertainer of the Yeah by announcing the new recipient of the CMA’s top prize. “The award goes to my friend, John Denver,” said Rich., who had been drinking gin-and-tonics backstage. At which point he pulled out his Zippo lighter and set fire to the card holding the name of his successor. Rich held the burning card up for the cameras on the nationally televised live show and smiled a big smile of triumph. The message to anyone watching seemed clear: in Rich’s eyes, a West Coast neo-folkie like John Denver, who had built his career on pop radio, was not welcome in country music.

However some disagree that the incident was meant as a shot at Charlie Rich. His son, Charlie Rich Jr. explains that it was more a shot at the industry instead of John Denver specifically, and that Rich was simply trying to be funny, and the combination of alcohol and pain medication from a recent accident made the incident that much more dramatic.

Most believe that the move cost Charlie Rich his career. Rich was presenting the award because he was the CMA “Entertainer of the Year” winner in 1974. It was the last CMA Charlie would ever receive, and his career went on a steady decline afterwards, many believe because of the wrath from industry insiders angry about Charlie’s antics.

Aside from the repercussions, and whether Rich had the authority to make such a stand as someone who had crossover radio hits himself, it remains an inspiring and significant moment in country music history, one where an artist had the guts to stand up for the integrity and autonomy of the genre.

How we could use a Charlie Rich right now.