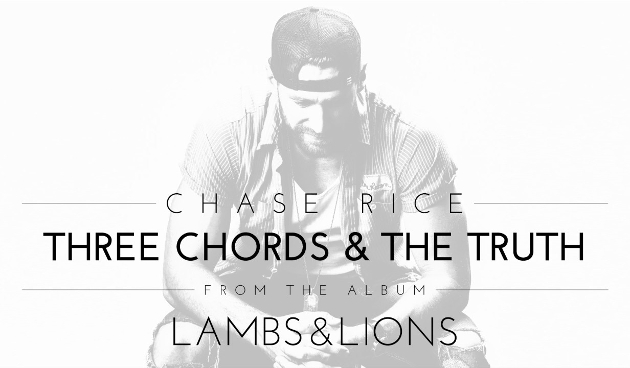 There comes a point in time when despite all the havoc some Bro-Country personality has wreaked on our beloved genre, you almost feel sorry for them as the implosion of their career becomes so patently evident and almost comical, and the explanations and excuses become so convoluted and disengaged with reality that you sense the desperation in the spiraling death knell in their once promising future. They thought it was going to be hot bitches in cutoffs and brand new trucks forever, when that was only true for an exclusive few.

With a group like Florida Georgia Line, at least you can give them credit for not knowing any better. Blissful ignorance is one of the keys to the duo’s success. But even when Chase Rice was writing “Cruise” with the pair, he had to know what he was doing. It’s not a lack of self-awareness that seems to have beset the career of Chase Rice, it’s his inconsistency of message, his attempt to try and play both sides of the cultural divide, and the simple math of there being only so many slots for 1st and 2nd tier mainstream country stars. And when the beer and tailgate references ceased for the latest round of mainstream radio musical chairs, Chase Rice was the last man standing.

Two ruinous singles in a row with “Whisper” and “Everybody We Know Does” that couldn’t crack the Top 40 on radio put Chase Rice on the outs with his label Columbia Nashville, and unlikely to see an album release anytime soon.

“It’s been hell,” Rice told Rolling Stone in mid June. “I’m still blessed, but when you know what you can do and you’re not able to do it, it feels like a slap in the face. I felt like people were holding me back from the music I could create. That’s no way to live, and it’s weighed me down for a long time.”

Yes, labels often hold mainstream artists back, but the way Chase Rice is out there portraying himself as a victim is a bit of revisionist history.

First, the song “Whisper” was prefaced by the most convoluted and undercutting letter from Chase Rice himself, trying to slightly warn fans that the song was no good, but that’s okay because just wait for the album which will be much better. That’s probably not the kind of confidence in a song radio programmers wanted to see from an artist when they were deciding if they wanted to add it to their playlists. And Chase can’t lump the quality issues of “Whisper” solely at the feet of his label either. He was the primary songwriter on the track, so this was not something the label assigned to him without his input.

When “Whisper” failed, Rice’s label went back to the drawing board, tried a new single “Everybody We Know Does” on for size, was disappointed again, and put Chase Rice’s career in limbo as they plotted their next move for an artist that radio had clearly fallen out of favor for. As we’ve seen countless times, when Music Row can’t count on radio, they have no other strategy to implement, especially with a pop star like Chase Rice.

“It’s not even going on the album. I put it out between the albums just to have it,” Chase Rice says in the podcast. “I don’t look at that song like, ‘Man, that was a mistake.’ It was a cool song we did. People sing it like crazy at shows. It was just a random song we decided to put out.”

That is what Chase Rice was saying in January when it looked like there was still an opportunity for his second album to be released by Columbia Nashville, and the failed “Whisper” would be left off as an obvious embarrassment. Now Rice is blaming his label for restricting him creatively and releasing a bad song. Even if “Whisper” was not going to be on an album, it was a single promoted to country radio, with big advertisements in country music radio periodicals hoping to be the lead single from his sophomore record. So to say it was just a “random song” is not entirely true.

Also in the Lance Armstrong podcast with Chase Rice, the subject of Rice’s latest single “Three Chords & The Truth” comes up. It’s the new single from Rice’s upcoming album Lambs & Lions album as part of his newly-minted album deal with Broken Bow after he was dropped from Columbia Nashville.

“It’s not a classic country song, it’s my style, man,” is what Chase Rice said at the time, but of course with a title that attempts to reference the most common definition of country (that being: “Three chords and the truth), the single is getting sold as Chase Rice swinging back to the roots after his failed attempts at pop country dominance. Of course a quick listen to “Three Chords & The Truth” reveals a song with not much to write home about, relying on references and name drops of past country music greatness to try and piggy back Chase back to a position of prominence in the mainstream. It’s not a terrible song, but it’s doubtful if it will be effective as a career relaunch, as Broken Bow continues to fill its imprint rosters with castoffs from other labels with questionable futures. Chase Rice has just weebled back and forth too much in his career, saying one thing and releasing another, for radio or random fans to remain loyal.

Unlike so many of the crop of Bro-Country artists, Chase Rice actually comes across as intelligent, and at least slightly self-aware. The problem is that his primary passion is making money, and making a big-time career in music as opposed to the music itself. Similar to Sam Hunt, Chase Rice came to music after a failed sports career. Country music became the avenue to become famous and make seven figures a year when the sports thing dried up, as opposed to an underlying passion for music that must be pursued at all costs, and a style that must be adhered to regardless of industry pressures.

Perhaps Rice’s new record will find a lot more substance than previous efforts, and some really good songs. His Ignite the Night record did have one or two songs that were a bit of a surprise. But after his behavior over the past few years, we’ll believe it when we hear it.