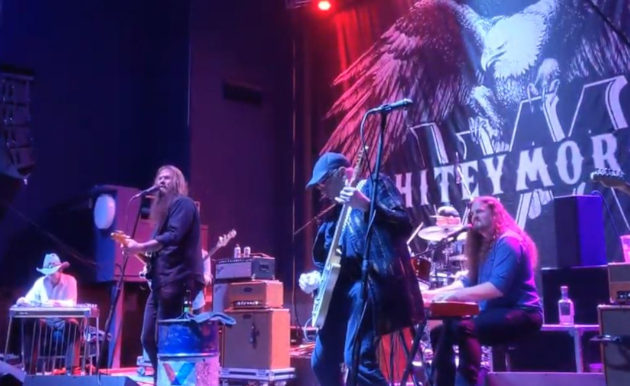 On Thursday, September 13th, Whitey Morgan and the 78’s played a show at The Apollo near Rockford, Illinois when they had an unexpected visitor stop by in the form of Cheap Trick Rick, a.k.a. Rock and Roll Hall of Famer Rick Nielsen. “Apparently he is a fan,” Whitey Morgan tells Saving Country Music. “He’s a great dude.”

Before the show, Rick Nielsen went backstage to meet the band, and brought along a vintage 1953 Gibson Les Paul gold top to show off. Nielsen is known for his vast collection of electric guitars, including the infamous five-necked guitar he sometimes performs with. But that wasn’t all. Nielsen stuck around for the show, and sauntered up on stage to participate in an epic, 7 1/2-minute rendition of the bluesy Johnny Paycheck classic “11 Months and 29 Days” (see video below). Faces were melted in the capacity crowd.

Rick Nielsen is from the Rockford, Illinois area, which is about an hour west of Chicago. Rick’s parents owned a music store in Rockford when he was growing up, and he is active in the Rockford community. Nielsen has displayed his vast guitar collection in multiple museums in the town to attract interest, and does charity work regularly along with supporting the local music and arts scene. Though Nielsen is mostly known for Cheap Trick’s rock and power pop sound, he’s collaborated with country artists in the past, including Glen Campbell.

Whitey Morgan and the 78’s are known for their deadly tight and energetic live shows, and for being country music heroes for their insistence on sticking to the roots of the music and a hard, honky-tonk sound. An Upper Midwesterner himself, Whitey is originally from Flint, Michigan, and now lives in Northern California. Most Whitey Morgan live shows are memorable. But his show at The Apollo Thursday night will be one for the books.