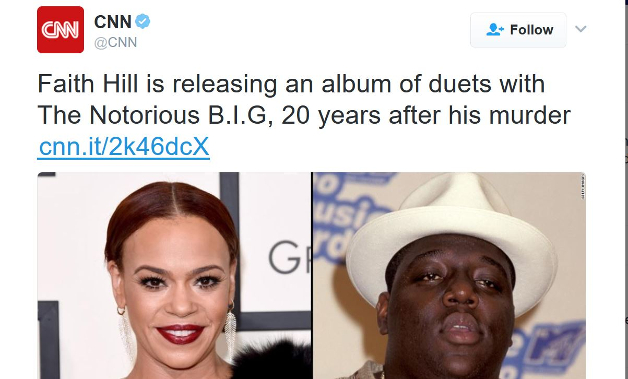 Not only is Faith Hill and Notorious B.I.G and incredibly awkward musical pairing on the surface, it’s also a strange headline because Notorious B.I.G. has been dead for some 20 years. He was gunned down in 1997 in a still unsolved murder. Nonetheless, it’s coming from CNN, right? President Trump may accuse them of “fake news,” but this isn’t the onion. And as strange as it may appear on paper, would we really put it past Music Row to plan some sort of stupid collaboration like this after what we have seen over the last few years?

Luckily though, the whole thing can be boiled down to a typo. It was actually Faith Evans, an R&B star that is planning to release a record called The Kind and I in May, that was supposed to be the subject of the story. Evans was married to Notorious B.I.G. when he died, though the two were estranged. The album is said to mix newly recorded vocals by Evans with B.I.G. vocals from the vault.

The great country world quickly began to chime in as the headline went viral. “Country music will never be the same,” said Jason Isbell on Twitter.

So there you go. That’s at least one crisis for country music averted.For now.