Come Lose Yourself in the Close Harmony of Mapache 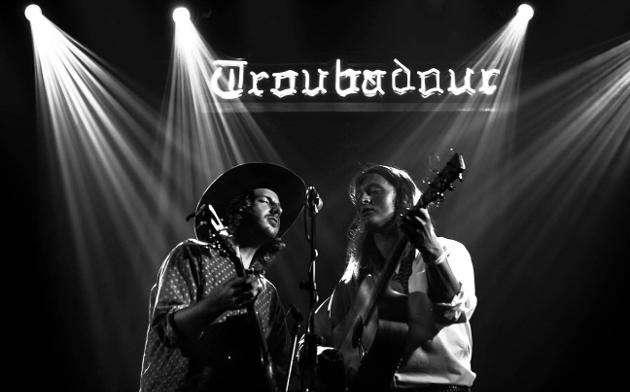 For those fans of The Louvin Brothers and the Cactus Blossoms, those keen on intricate harmonies and acoustic textures who don’t need to be told why The Everly Brothers are one of the most important acts in American music and deserve every square inch they occupy in the Country Music Hall of Fame, here comes a duo from Southern California called Mapache that will put you right back in that warm spot all those excellent old country and folk records did, only with the ownership of discovering and loving them in your own time.

With only two people and one mic, Mapache can fill up a room with more soul soaring harmony than most symphonic assemblies, carried to great heights by melodies that are incredibly supple and bursting with delight, timeless in their textures and delivery, yet with subtle new turns that give Mapache the benefit of originality to go along with the nostalgic yearning.

Made up of two young Southern Californians from the Glendale area named Clay Finch and Sam Blasucci, and borrowing their name from the Spanish pronunciation for “Racoon,” they don’t make up your typical duo looking to burst into the roots space. Before Mapache, Sam Blasucci missioned in Saltillo, Mexico, while Clay Finch attended Chico State. They got their name by showing up to a gig one time after hanging out at the beach and getting so sunburned, they had circles around their eyes. The name of the label releasing Mapache’s debut, self-titled record is “Spiritual Pajamas,” and the spiel behind their music is all about cosmic America and West Coast vibes. This in itself may be enough to scare off Ma and Pa Kettle back in Birmingham.

Yet what Mapache has that so many dwelling east of the Rockies fail to capture is the evermore enchantment of those close harmonies that are the building block from where all country and folk music sprang. It is primitive and timeless, immune to trends, and often more potent in stirring the spirit than more modern concoctions of music. Mapache is not cosmic music from the need of electronic or chemical enhancements to reveal the spiritual in the carnal existence, it’s psychedelic in how it can unlock doors in the brain and allows previously dormant synapses to fire from its organic simplicity. It’s so simple, yet so enrapturing. If you want to go another step by imbibing in some tincture supplied in the bounty of mother nature, then go right ahead. But Mapache sober is intoxicating enough.

Though this is just a two-piece, when these two young men booked studio time they brought with them just the right mixture of drums and percussion, steel guitar, and banjo to certain songs to keep the experience throughout enthralling and spicy, yet completely respectful of what makes Mapache special and not suffocating the magic with self-indulgent production. Their sound has made believers of numerous West Coast music names, including Chris Robinson of The Black Crowes, and Jonathan Richman.

But none of this would be worth harping over if the songwriting wasn’t also superb. Though Mapache’s style is of a universal nature in the roots world, their lyrics are distinctly born of their California experience, reminding you that the greater Los Angeles area isn’t just the home of Hollywood, it’s bisected by mountains, surrounded by desert, bordered by the Pacific, and built where natural wonder can inspire music no different than the smoky hills of Appalachia. There’s even a Spanish-sung song on this record, giving respect to the Hispanic heritage that is just as much a part of Southern California as anything.

Most of all Mapache reminds you that it doesn’t take much to make great music. The fellowship of two young men with a couple of guitars and a sincere passion for the craft can do more than multi-million dollar studios full of session players and producers, if the magic is right. In a roiled, embattled moment in history where people are looking for somewhere to flee from the conflict and dissent, Mapache opens up a portal to a better place through the unifying magic of roots music.