Those hoping to get a tour of Conway Twitty’s palatial mansion in Herndersonville, TN are tough out of luck. Though the grounds of what once was known as Twitty City are still open, and the current owners—The Trinity Broadcasting Network—still broadcast Sunday services and other events from the complex, tourists hoping to get a glimpse of Twitty’s home are being turned away.

“We do not give tours any longer,” Station Manager Becky Bustin of Trinity Music City confirmed to Saving Country Music, saying the tours were suspended indefinitely on July 3rd. “It was a corporate decision.”

Conway opened the multi-structure tourist attraction and family compound in 1982 at a price tag of $3.5 million, and lived there until his death in 1993. The centerpiece was Conway’s 24-room mansion surrounded by memorial gardens that became a destination for tourists and famous for the elaborate Christmas light displays every December. 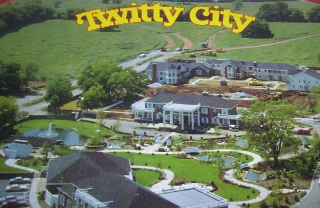 “I built Twitty City because I wanted to have a place where my kids and I could always be close together, and they have homes right here,” Conway explained in an episode of ‘Lifestyles of the Rich and Famous’ from the 80’s. “I also wanted a first-class place for country music fans to come to when they come to Nashville, and get as close to an artist as they can get … A lot of my friends in this business said ‘Conway, you’ve lost your mind.’ And I can understand how they feel, but they haven’t been as close to this concept as I have. I have all the privacy I need right here at Twitty City. I can come out my door and get to my office which is only 100 yards away if I want to without anybody ever seeing me. Or if I want to be seen, I can.”

However when Conway Twitty passed away, the ownership of Twitty City became part of a bitter legal dispute between Conway’s four children and his third wife Dee, eventually putting the property into liquidation.

“When Conway Twitty married his third wife, he failed to update his will to take into account his changed circumstances,” says the Heritage Law Group. “Because Conway had not amended his will after marriage, his third wife was entitled to a 1/3 share of his estate. His children fought in court to continue living in their Twitty City houses. They also fought to keep the salaries that had been receiving from their father’s company. Eventually, the probate judge ordered everything to be sold at auction. The children were kicked out of the houses, and all personal items were sold. Dee received 1/3 of the auction proceeds, and the remaining 2/3 was split among his four children.”

Twitty City became Trinity Music City when the Trinity Broadcasting Network purchased the compound, but the new owners continued to keep the gift shop open and offer tours of the grounds and Conway’s home. Trinity Music City is now primarily used for broadcasts of Sunday services and other live events.

“We still have our productions going on,” says Becky Bustin of Trinity.

Interest had waned in the tours, primarily because Twitty City had fallen off the map as a tourist destination. In recent years, only if you knew to ask at the gift shop for a guided tour would you be granted one.