If we’re ever going to flip the script when it comes to the quality of country and roots music and the representation of women within its ranks, it’s going to take incredible voices and cunning songwriting that can’t be held down by the norms and habits that have plagued the music for too long. In the last few years multiple voices have emerged that could bring the promise of greater balance to fruition, and possibly none as strong and compelling as Courtney Marie Andrews.

Announced on Monday (1-10), Andrews will be making her debut on Fat Possum Records in conjunction with Mama Bird and Loose Music with May Your Kindness Remain. Featuring ten tracks produced by Canadian Mark Howard, who has previously produced records for Willie Nelson, Lucinda Williams and Tom Waits, May Your Kindness Remain is said to awaken more gospel influences in Courtney, and this certainly can be heard in the album’s title track, with contributions from Gospel singer C.C. White (listen below).

Courtney Marie’s stories and subjects are often hard to discern from her own narrative since she’s lived such and interesting and character-filled life. Leaving home at 16-years-old to become a busking musician up and down the West Coast, and later traveling in eastern parts of the United States and Europe, she eventually made a name for herself by impressing artists like Jimmy Eat World and Ryan Adams, and singing backup on some impressive stages as she toured the country. 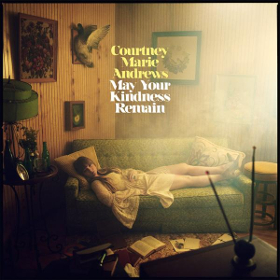 The title track of the new record gives hope to the downtrodden, reaffirming that regardless of the adversity and outcomes in life, never sacrifice your greater parts, because they could still have a purpose in the future.

May Your Kindness Remain is now up for pre-order, and will be released on March 23rd.