“The title sounds melancholy, but the resolve isn’t,” Patton explains. “This record is full of songs about people who have had to ‘fly alone’ in some way, whether through grief, loss, life choices, addiction or love. We have to work through our struggles, choose our own destiny, just like the characters in each song. We have to make ourselves happy. No one else can do that for us. I’ve been down in most of those ways, but I choose happiness. In the end, ‘flying alone’ is soaring because you pick your path and you find your way.” 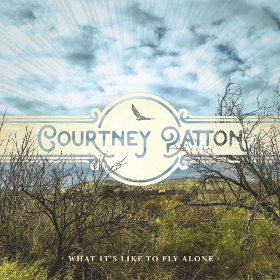 What It’s Like to Fly Alone is written mostly by Patton, with five solo-written songs, four written with distinguished Texas songwriter Larry Hooper, as well as contributions from Matt Hillyer of 1100 Springs, Micky Braun from Micky and the Motorcars, and a cover of “Gold Standard” co-written by Kelley Mickwee and Owen Temple.

Courtney Patton’s last album So This Is Life was produced by fellow Texas songwriter Drew Kennedy, but Courtney decided to take the reigns of this new one herself. However there were a few people guiding Patton’s hand in the process, even if they are no longer around. “Red Bandana Blue (Kent’s Song)” is inspired by Kent Finlay—the former owner of the Cheatham Street Warehouse who passed away in 2015. The album ends with “Fourteen Years,” which is a look back at Patton’s tragic loss of a sister in a car accident and the time spent after that loss wondering what might have been.

What It’s Like to Fly Alone is now available for pre-order, and you can listen to a new song “Shove” below.