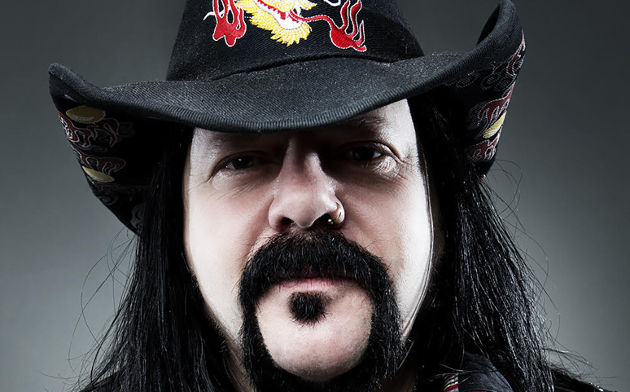 When you’re looking for the names of people who were imperative to the rise and eventual success of independent country music that we enjoy today, the drummer for the metal band Pantera may not be your first choice to finger. But Vinnie Paul, who passed away on Friday, June 22nd, played a seminal role in the formation of the country music underground that would eventually give rise to a new generation of independent stars like Hank Williams III, Shooter Jennings, and later Cody Jinks and even Sturgill Simpson through seminal efforts to present the importance and majesty of country music to a generation of fans who had been predisposed to hating country music previously.

Before the mid 00’s, there was no underground in country music to speak of, at least in any organized state. There were a few acts like Randy Howard, Th’ Legendary Shack Shakers, and blues acts like Scott H. Biram building the foundations of what would come later. There was also alt-country, with artists like Steve Earle, Lucinda Williams, and Ryan Adams, and labels that had sprung up in the decade before such as Bloodshot Records to support them. But it wasn’t until Hank Williams III came along with not just a sound, but a DIY approach to country music that fans and new performers came flooding into the movement, and rallying behind it.

This surge in popularity happened very specifically due to the efforts of the members of Pantera, which was officially disbanded in 2003 before everything began to get organized in the country underground in earnest. The former lead singer Phil Anselmo decided to recruit Hank Williams III as a member of his heavy metal side project Superjoint Ritual in the early 00’s. When punks and metal fans started digging into the past of Hank3 after seeing him on stage with Anselmo, they pulled up records like Risin’ Outlaw, and Lovesick, Broke, and Driftin’ from Hank3’s country catalog.

These Hank3 records weren’t country punk or country metal, and they certainly weren’t the country music of the day that was giving rise to performers like Keith Urban and Kenny Chesney. This was throwback, old school country music that featured fiddle, steel, yodels and moans, and amazing songwriting from Hank3, Wayne “The Train” Hancock, and others. The pain and sorrow found in these recordings was something punk and metal fans could immediately relate to. They just needed an introduction to how country music could speak to them, and wasn’t all Shania Twain and Garth Brooks.

Meanwhile and simultaneously, Vinnie Paul was laboring on a project many years in the making, and much-anticipated by metal and country fans alike. It was called Rebel Meets Rebel, and it bridged the two worlds of country and metal like never before. Recorded intermittently between 1999 and 2003 whenever Pantera had lulls in its schedule, it was the first, and arguably the best bridging of country and heavy metal music in history. David Allan Coe had struck up a friendship with Vinnie Paul and his brother and Pantera guitarist Dimebag Darrell, and the trio decided to form a band together, with Pantera playing the music, and David Allan Coe being the frontman.

But the project almost never saw the light of day. After Pantera dissolved, Vinnie Paul formed the metal band Damageplan with Dimebag, and began touring the country. Where the height of Pantera saw the band playing to sold out arenas on world tours, Damageplan played to clubs around the country, keeping it personal with fans. On December 8th, 2004 when playing a show at the Alrosa Villa in Columbus, Ohio, former Marine Nathan Gale jumped out of the crowd, brandishing a 9mm pistol. He shot Dimebag Darrell five times in the head right after the show started. Gale also killed three other individuals, and wounded seven more in the rampage before being shot by a responding police officer. Nathan Gayle was said to be inspired by the breakup of Pantera to carry out the mass shooting.

After the death of Dimebag Darrell, it looked like the long-rumored Rebel Meets Rebel project may not move forward. But after burying his brother, Vinnie Paul set out to do what he could to finish the record, and release it to the public. Rebel Meets Rebel featured 12 tracks, including a guest appearance by Hank Williams III on the song “Get Outta My Life.” Paul formed his own record label called Big Vin Records in a partnership with Fontana Records and Universal Music so the album could be released. Rebel Meets Rebel was eventually sent to stores on May 2nd, 2006.

With all the lyrics written by David Allan Coe, and all the music performed by Pantera, Rebel Meets Rebel is surprisingly good for a side project, even if it feels silly and sloppy in some spots. Much of the record focuses on illustrating the similarities of country and metal, not just sonically, but philosophically through the lyrics, and the album has a few songs that show surprising depth. Though today a record with the Confederate Flag emblazoned on the cover would immediately be labeled as racist, the song “Cherokee Cry” is given credit for its anti-racist message, specifically aimed at the plight of Native Americans.

Just three months before, Hank Williams III had released his magum opus double album Straight to Hell. Paired with Rebel Meets Rebel, a new country music underground began to be flooded with punk and metal fans, and artist who appreciated the old school-style of country music. And this wasn’t evidenced in country metal hybrids, though this was one element of the new underground country scene. Many of these fans found an appreciation for the original Hank Williams, more contemporary traditional country performers like Dale Watson and Wayne “The Train” Hancock, and even bluegrass got into the mix with bands like The Hackensaw Boys and the .357 String Band.

Today, the thriving, vibrant scene that has risen up to support artists such as Sturgill Simpson, Cody Jinks, Whitey Morgan, Sarah Shook, and Margo Price can be very specifically tied back to the formation of the country music underground made possible by the efforts of former Pantera members, and Vinnie Paul specifically. Artist and fans who grew up with the traditional country music they heard their grandparents play were reaching back to their roots as they searched for stability and meaning after their wild 20’s, and found it in the classic recordings, and a new generation of artists and fellow fans.

What did Vinnie Paul have to do with Sturgill Simpson winning a Grammy Award, and artists like Cody Jinks and Margo Price selling out multiple nights at the Ryman Auditorium? On the surface, it may not seem like much. But for the country fans who started in punk and metal, and have been along for the ride ever since, they don’t need to be told how important Vinnie Paul was. Like Gram Parsons, Vinnie Paul offered something invaluable to their lives—he proved country music could be cool.