This is Hank III’s new album: 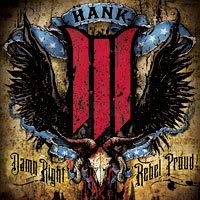 According to Hank III: “There is one thing holding the cd back. Its called Legal issues! Nothing else.”