Totally unfair Darci Carlson—girls this hot aren’t supposed to be this talented, or be off into throwback country that only the lost souls and forgotten rejects of society still listen to. And none of this should be emanating from the Pacific Northwest. You know, because what the hell do they know about country music up there?

…Apparently, they know more than many of the cretins on Music Row. 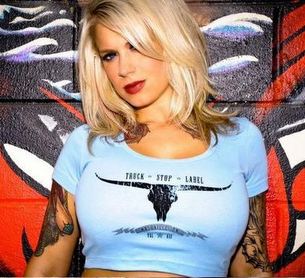 I first heard of Darci Carlson when she was nominated for one of Dale Watson’s Ameripolitan Awards in the Outlaw Female category, but her musical roots trace farther back. Carlson started a songwriting duo in 2010 called The Dolly Rottens that eventually morphed into a full blown punk rock band. Then she started working with Jamie Chamberlin of of Black Dahlia Films who cast her in various music video projects in the Pacific Northwest, eventually leading to an introduction to Billy Gibbons of ZZ Top, and Darci being booked on the band’s 2012 Gang of Outlaws tour.

The experience inspired Darci to take her own music more seriously, and when she arrived back home she began to play with some of the notables of underground country who call the greater Seattle area home, including Billy Cook of the now defunct .357 String Band, and former bassist for Bob Wayne’s Outlaw Carnies, Dan Infecto. Next thing you know she making an EP with Billy, Dan, others from around the Seattle scene, and Andy Gibson of Hank3 fame.

Written solely by Carlson, the 5-song Release Me EP is a throwback, honky-tonkin, foot-stompin’ true country affair that lays full throttle on the twang and layers in the steel guitar hard and heavy. But this isn’t just all about styling and posturing to prove how country it is. Darci crafts some really smart songs and has an understanding of chords and arrangement and songwriting that separates her from the crowd of throwback country garage bands that can’t do much better than ape the style of others. Though it’s interpretive of classic honky tonk, Carlson adds a strong shot of her own personality to the mixture to make the end result something true to herself and original to the landscape. 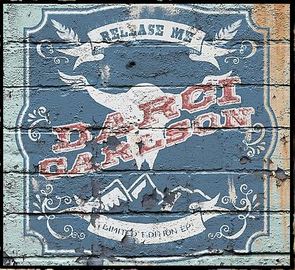 Carlson is rough-hewn and aggressive, but not tasteless or tacky. She knows where the line is, walks right up to it, dangles her toe just over it, but never crosses. This is not punk country, this is honky tonk. Meanwhile her voice is honey sweet at times, but carries this smoky, raspy quality that punctuates the experience like a desirable aftertaste of a fine spirit.

My wish would be that these recordings came with a bit more clarity. It has that homespun aspect where the tracks feel filmy and could use a little separation in the signals. Even though these songs are well-written, sometimes you can’t understand all the words. But hey, this is a debut EP, and it’s supposed to be a starting point and a fair representation of the music, and Release Me is certainly that. This is about Darci Carlson’s voice, songs, and style illustrated, and the boys in Seattle do an excellent job interpreting her style.

Something else great about this EP is that you get an earful of guitar/steel player Andy Gibson. Whether its those Hank3 records where he seems to always play a secondary role to the excellent, but overused Johnny Hiland, or he’s in the control booth of a recording session in his renegade Nashville studio instead of playing himself, Andy Gibson fans always are left feeling a little wanting of more of him. Here we finally get it, and primarily on the pedal steel as opposed to the stand up rig and dobro. The addition of Andy Gibson really makes this record.

Darci Carlson’s Release Me EP is packed with entertainment, and like a debut EP is supposed to do, it gets you salivating for what’s to come. The underground roots community is chock full of talent, and it’s encouraging to see another new face to help carry that talent to an audience beyond the region.