Trigger Down with Pop Country 74 Comments 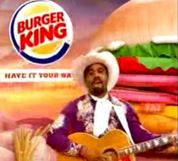 As if legions of college town string bands full of anthropology majors mercilessly regurgitation “Wagon Wheel” over and over to try and score hummers from undergrads after the show in their Volvos with the back windows tattooed with political stickers wasn’t enough, now Hootie has lent his back to the collective toil of the Western World to do everything humanly possible to run this song into the proverbial ever-loving ground so hard that it taps the mantle of the earth and causes a catastrophic volcanic and tectonic event that wipes out the entire human fucking race.

Even fat assholes in football jerseys and orange Crocks who make it a force of habit to yell “Free Bird!!” at every single live music event they’ve ever attended are listening to this thing and going, “Really?”

“Wagon Wheel” isn’t the “Free Bird” of our generation, it is our generation’s sonic equivalent of inserting a corkscrew into your earhole and giving it a nice good healthy turn. The song, initially…ahem… “borrowed” from a Bob Dylan demo by Old Crow Medicine Show’s Ketch Secor with a “better to ask forgiveness than permission” approach, officially holds the title of the most ubiquitous song in the history of mankind that nobody’s heard. Darius is on a mission to fix that last part.

Yeah, I liked “Wagon Wheel” just like you did when it was released nearly a decade ago, but the incessant versions and Darius’s specifically is nauseating to the point of inducing violence. Actually Hootie starts it off harmless enough, it’s the chorus where the layers of harmonies and the egregious use of Auto-tune makes him sound like Tron 2000 giving oral sex to R2-D2. Like Obi-Wan would say in his infinite wisdom, “His voice is more machine than man now.”

Oh wait, it’s Lady Antebellum singing harmonies with Darius on this thing? Shit, maybe I’m letting it off too easy. Check it out for yourself…

And who is the prick from “Save Country Music” on FACEBOOK that put the above video together? So he stole my name, then he stole this song, that Darius took from Old Crow, that Old Crow took from Dylan, and that all collectively comes together so that this idiot can solicit “likes” on his stupid ding-dong Facebook page? Let me give you a little piece of advice “Save Country Music” on Facebook: “likes” have no cash value, and ripping off folks will bullhorns as big as mine is never a good idea.

…actually, scratch that last one. That sandwich is pretty damn good.