Legendary country Outlaw singer and songwriter David Allan Coe is recovering at the Ocala Regional Medical Center after being broadsided by a semi-truck early Tuesday morning in his 2011 black Chevrolet suburban. Coe’s son, guitar player Tyler Mahan Coe has released a statement to Saving Country Music about the incident.

My father is heavily sedated right now. I understand he has bruises and cuts all over his body but hasn’t shown any signs of serious injuries, which is miraculous if you’ve seen the photos of his vehicle. It’s going to take some time for him to recuperate. Nobody can say how quickly he will heal. Whenever he is able, as I’m sure he will be, we will resume touring. Until then, our family and management would appreciate the privacy to handle affairs demanding immediate attention. When we know more, everyone will know.

I wish [the other people involved in the crash] a swift recovery. 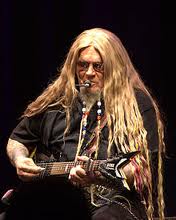 Coe’s wife is with him in the hospital and also says the entertainer is “doing OK.”

The wreck happened at the intersection of Silver Springs Boulevard and Pine Ave. in Ocala, FL. According to police, David Allan Coe ran a red light, and then was hit on the passenger side by a Peterbilt semi driven by 59-year-old Robert Johnson, who also was carrying a passenger, 49-year-old Lisa Meade. They were from California, hauling crates of radishes and corn to St. Louis. Johnson was initially listed in serious condition, but was transferred to Ocala Regional and upgraded to “stable.” Passenger Lisa Meade was treated and discharged.

According to witnesses, Coe was traveling eastbound on Silver Springs when he ran a red light at the Pine intersection where the semi truck was traveling north. The truck hit the side of Coe’s Suburban, pushing it all the way into a nearby court annex parking lot. The impact sent the semi on its side and it ended up wrapped around a cement pole, spilling its contents. Coe was wearing his seat belt and had to be extricated from the vehicle by Ocala Fire Rescue.

See Photo Gallery of the Accident

Coe’s tour manager Bruce Smith says his next two concerts in St. Louis and Louisville, KY have been canceled due to the accident.

UPDATE 3-21-13 4:30 PM CDT – David Allan Coe remains in the hospital. According to his son Tyler Mahan Coe, he suffered cracked ribs and a bruised kidneys in the accident from the seat belt, but was able to sit up on the edge of the bed yesterday and is improving.

Police have also offered more information on the accident, saying that neither speed nor alcohol were involved, and that there was nothing impairing Coe’s vision when he entered the intersection. Coe has said he can’t remember anything just prior to the accident.

As Coe continues to recover, and additional concert at Billy Bob’s Texas in Ft. Worth has been canceled from his schedule this Friday the 29th.

UPDATE 3-24-13 1:15 PM CDT – David Allan Coe’s wife Kimberly shared the photo below yesterday, with the note, “David Allan Coe suffered broke ribs from the seat belt, bruised kidneys and head trauma nothing life threatening, he got up and walked around a little yesterday hes coming back a little at a time.” 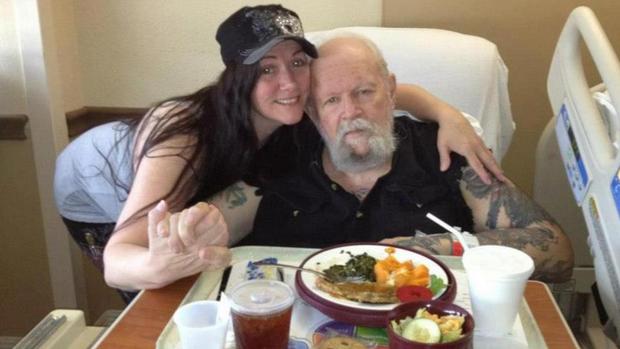 UPDATE: 3-27-13 7:00 PM CDT – David Allan Coe was discharged from the hospital on March 23rd shortly after the above photo was taken, though he is still recovering from his injuries, and additional appearance dates have been canceled. According to Coe’s wife, Kimberly Hastings Coe:

“David being David, said to me before leaving the hospital; ‘Well, now I have an opportunity to write another great song. A lot of fans tell me that my songs have given them strength to get through difficult times. This accident has given me another subject in my life to write about that will hopefully help others.’ Again, I want to thank you all for the many thoughts and prayers for David. It means the world to us.”

“There were angels with David during the accident keeping him safe and while he was in the hospital making him well again. If anyone has seen the photos from the accident, you can understand what I mean. The staff at the Ocala Regional Hospital & Trauma Unit in the E.R. are the most phenomenal, dedicated and compassionate angels on earth. I was with him by his side from the time I arrived at the hospital until we left. They continuously took care of David around the clock. Words will never express our gratitude and thankfulness to them and for them.” 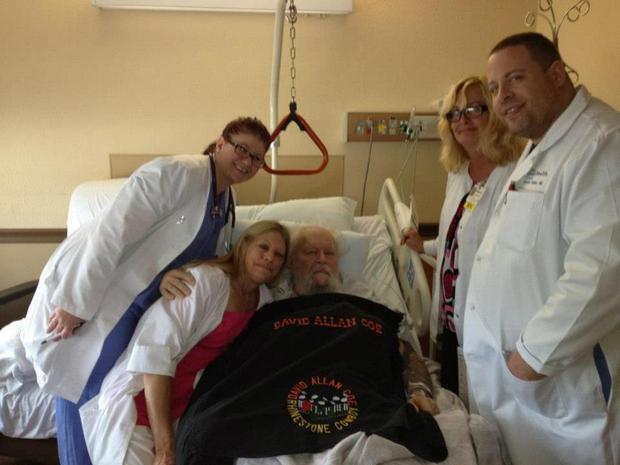 They have also set up a place where fans can send get well cards if they wish.

More information on David Allan Coe’s condition will be posted here when it becomes available.